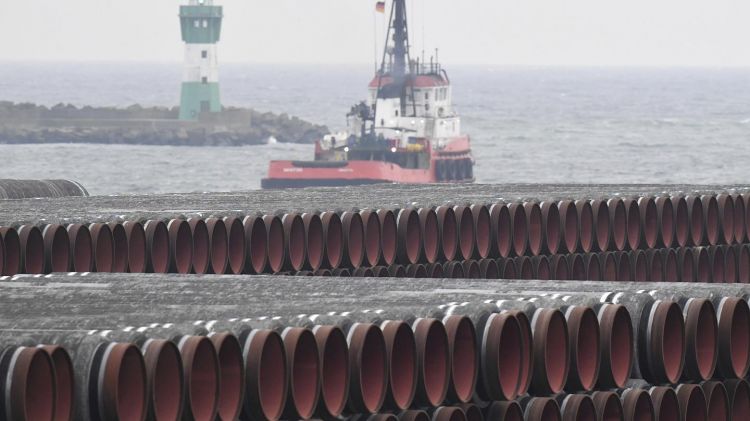 The conclusion of Nord Stream 2’s construction through the Baltic Sea poses a range of geo-economic and security challenges – and not only to Eastern Europe.
Whether the Biden Administration’s surprising approval of Nord Stream 2 this summer means that the pipeline will soon start operation remains an open question. The US Congress seems to be about to introduce new sanctions against the company operating the pipeline. However, the imminent completion and remaining certification process by European authorities will increase pressure for the pipeline to start operation.
Whether Nord Stream 2 will go online or not, its emergence raises questions about the EU’s future relationship with Kyiv, as well as Ukraine’s role both as a transit and storage country for natural gas and as a potential alternative energy exporter. Russia sees the completion of the controversial pipeline not only as a commercial and technological achievement, but as a major geopolitical victory for Moscow.
If it starts operation, Nord Stream 2 will remove the remaining leverage that Ukraine had as a major transit country for the export of Siberian and Central Asian gas to the EU. This is not mere conjecture: Russia’s onetime economic dependency on Ukraine was reduced with the start of the first leg of the original Nord Stream pipeline’s operation in 2011. After Angela Merkel opened the second string of Nord Stream in October 2012, Russian-Ukrainian relations deteriorated rapidly.
With its annexation of Crimea and intervention in Eastern Ukraine in 2014, Russia began to treat Ukraine in the same way as it had been treating Moldova and Georgia for many years before.
These two countries had already been dismembered by the Kremlin, because Chisinau and Tbilisi never held any significant economic leverage over Moscow. The activation of Gazprom’s TurkStream pipeline via the Black Sea in early 2020, and the completion of Nord Stream 2 via the Baltic Sea in September 2021, conclude Russia’s energy-industrial disentanglement from Ukraine. It gives Putin a free hand to continue his aggression against Russia’s presumed “brother nation”.
Ukraine is an important partner for the West. Compared to most other post-Soviet republics, it has become a beacon of relatively free and pluralistic democracy. While not yet a fully liberal and consolidated state, and continuing to grapple with issues in the rule of law, Ukraine is far more open, pro-Western and democratic than authoritarian Russia and Belarus.
It is often forgotten that Ukraine emerged in 1991 as a new state with the world’s third largest atomic arsenal, comprising more nuclear weapons than France, the UK and China then held combined. In 1994, the Ukrainian leadership handed over all of its warheads and joined the Nuclear Non-Proliferation Treaty as a fully non-nuclear weapons state.
Twenty years later Russia, a founder and guarantor of the non-proliferation regime as well as an official nuclear weapons state attacked Ukraine. In 2014, Moscow undermined the entire logic of the international system to prevent the spread of arms of mass destruction. Ever since, the Russian-Ukrainian conflict has been creating international security risks that have global implications.
Against this background, strengthening Ukraine’s security, and the Ukrainian energy sector in particular, is a political responsibility and should be high on the agenda of the West. There are a number of ways in which the EU and US can come to Ukraine’s aid while also boosting long-term European energy security. Brussels – and not only the US Congress – should exploit all possible legal instruments to either prevent or limit the geo-economic impact of Nord Stream 2 and its use within Russia’s hybrid war against Ukraine.
One of the opportunities for the West to help Ukraine is to take full advantage of the country’s significant renewable energy potential, in particular with regard to blue and green hydrogen, as well as offshore wind capacities. This has already been recognised in the EU’s Green New Deal, and the US-German Green Fund for Ukraine. It is a trend that will – and should – continue, in order to both protect Ukraine’s importance as geopolitical player in Eastern Europe, and to match the expected further rapid growth of green energy demand in Europe.
The Ukrainian state gas company Naftogaz has gone through major reforms in recent years. It has successfully navigated a turn-around from a famously corrupt drain on public finances to a poster-child of corporate governance. However significant foreign investment will be needed to ensure an adaptation and modernisation of Ukraine’s already significant capacities. A further updating, expanding, and converting of the existing gas transportation and storage infrastructure in Ukraine is an urgent priority. New facilities for the production of green and blue hydrogen as well as renewable energy will need to be planned and constructed.
In order to achieve rapid progress in these areas, both governmental and corporate investors need to step in, providing the necessary funding, expertise, and institutional backing. This investment will not only secure significant financial and environmental returns, but would also counter-balance the negative impact of a possible start of operation of Nord Stream 2 in the EU’s eastern neighbourhood and beyond.