Russian Weapon Might Be the Most Powerful on Earth - VIDEO | Eurasia Diary - ednews.net

Russian Weapon Might Be the Most Powerful on Earth - VIDEO 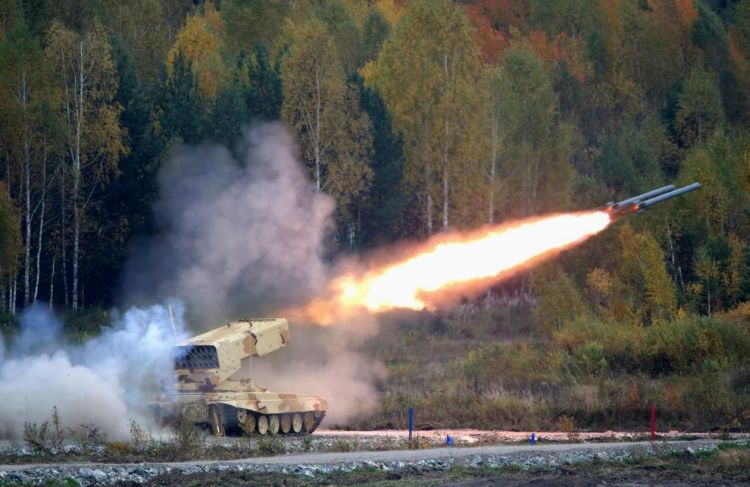 The TOS-1 Buratino is a unique Russian self-propelled multiple rocket launcher system (MRLS) that has seen action in global hotspots like Afghanistan, Chechnya, Iraq and Syria. Like the enormous 240-millimeter 2S4 self-propelled mortar, the TOS-1’s specialty is obliterating heavily fortified positions. Although some of these may be found in rural rebel strongholds and fortified caves, they have often been employed in heavily urbanized environments. It’s gained a uniquely nasty reputation because of the horrifying effects of its fuel-air explosive warheads. Eurasia Diary reports citing National Interest.

TOS stands for “heavy flame thrower,” which is only accurate in a literal sense: instead of projecting a stream of jellied gasoline, the TOS-1 launches a rocket carrying a fuel-air explosive (FAE).

Most of Russia’s artillery weapons use a light armored vehicle chassis like that of the MTLB armored carrier. The forty-six-ton TOS-1, on the other hand, uses the much heavier hull of a T-72 tank. There’s a good reason: the original TOS-1 model only had a range of around three kilometers, meaning it would have to withstand hostile fire from all kinds of enemy weapon systems.

The TOS-1 mounts a launch unit with thirty 230-millimeter diameter rocket tubes. The prominence of the launch unit is what earned it the name Buratino, a long-nosed Pinocchio-like character in a children’s story. The rockets can be fired individually or ripple-fired en masse in the space of six to twelve seconds. The vehicle also mounts a targeting computer and a laser-range finder

The first combat use of the TOS-1 Buratino is recorded between 1988 and 1989 against Afghan rebels in the rugged terrain of the Panjshir Valley. However, it was in the 1999, the same year that the TOS-1 was first revealed to the public, that the TOS-1 first made a name for itself in the siege of the Chechen capital of Grozny.

After sustaining terrible losses attempting to assault Grozny’s center during the first Chechen War, for the second war the Russian Army surrounded the city with heavy artillery and tanks. It then dispatched small infantry teams to probe the Chechen defender. Once the Chechens opened fire, the artillery surrounding the city would pulverize the city blocks from which the fire originated. TOS-1s played a major role in these bombardments, and were also appreciated for creating explosions liable to detonate mines and booby-traps left behind by the Chechen fighters.

At least four TOS-1s were sold to Iraq in 2014, and they were first seen entering action against ISIS in the battle for Jurf al-Sakhar in 2014. The battle was a victory for an Iraqi Shia militia, although how much the TOS-1s contributed to that is unclear. Later video footage shows TOS-1s ripple-firing rockets on targets near Baiji, Iraq.

The TOS-1As were also given to the Syrian Arab Army, which deployed them against various Syrian rebels. Most of the footage released appears to depict bombardment of rural areas such as the mountains around Latakia, rather than inner-city locations.

However, a TOS-1 unit was recorded being used in preparation for an offensive against the city of Hama, and this June, opposition fighters posted a video apparently showing the destruction of TOS-1 near Hama by long-range antitank missiles. This highlights how the need to deploy the short-range TOS-1 closer the front line makes it vulnerable to such weapons.

A TOS-1 rocket barrage will wipe out everything within the two-hundred-by-three-hundred-meter blast zone. This is problematic when the weapon is employed against targets amid an urban civilian population—typical of much of the fighting in Iraq, Syria and Ukraine.