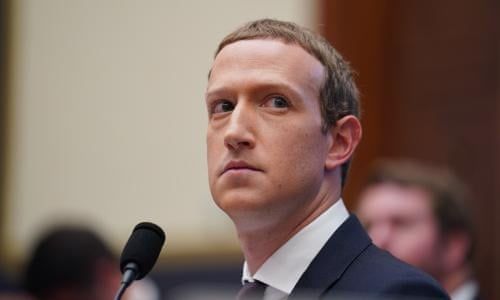 Revelations in July that the US government was working with Facebook to identify and suppress social media posts critical of vaccines or pandemic policy drew accusations from Republicans of censoring free speech.
Facebook CE Mark Zuckerberg's staff warned him that "misinformation" posted by some of the social network's 2 billion would hamper his plan to persuade 50 million people to get the COVID-19 jab.
The Wall Street Journal reported that even the UN's World Health Organization and Unicef had raised concerns with the social networking site.
Zuckerberg launched the COVID Information Centre feature on Facebook and Instagram, which tells users when and where they can get vaccinated, back in March. But excepts from internal company memos and research show that comments on posts directed through the system were anti-vax.
"Anti-vaccine commenters that swarm their Pages," one employee wrote in a memo, while another warned that 41 per cent of the 775 million daily comments on English-language posts about the jabs were discouraging people from having them.
Facebook's researchers termed such posts "barrier to vaccination" content and said supressing them should be "a top company priority".
The Information centre posts became "cesspools of anti-vaccine comments," they wrote, adding" "That's a huge problem and we need to fix it."
Facebook spokesman Aaron Simpson insisted that the company's initiative had not backfired.
"We're focused on outcomes, and the data shows that for people in the US on Facebook, vaccine hesitancy has declined by about 50 per cent since January, and acceptance is high," he said.
"Narrowly characterizing leaked documents doesn't accurately represent the problem, and it also ignores the work that's been underway to make comments on posts about COVID-19 and vaccines safer and more reliable," Simpson added.
White House spokeswoman Jen Psaki revealed in July that President Joe Biden's administration was flagging Facebook posts on coronavirus to the Big Tech giant it considered "misinformation" over the virus, vaccines and ongoing government restrictions. That drew criticisms of collusion between the corporation and officials in censoring free speech.
Days later, Biden accused Facebook of "killing people" with misinformation, before retracting that claim.