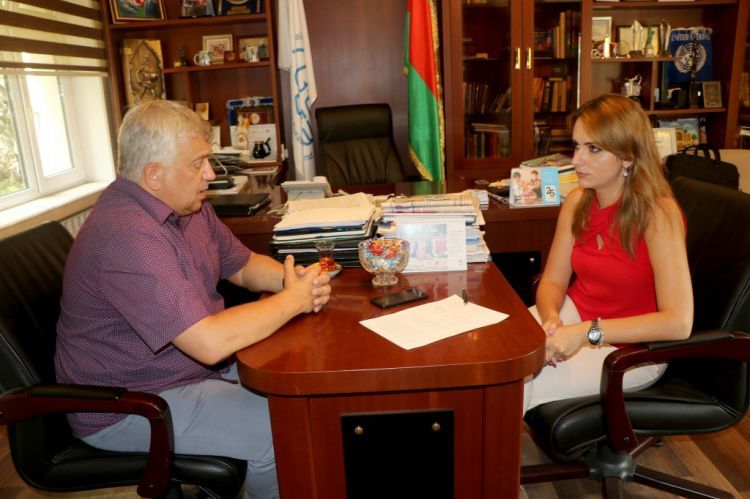 On Friday, August 17, Prime Minister of Armenia Nikol Pashinyan summed up the first hundred days of his government. At the rally, organized in the center of Yerevan, Pashinyan talked about the successes and failures of his 100 days in power, however, what is really hiding behind loud phrases and to where Pashinyan leads Armenia.
A well-known Russian historian and professor of Caucasus studies Oleg Kuznetsov told Eurasia Diary about this.
Oleg Kuznetsov stated that, in his opinion, Armenia is increasingly driving under the influence of the United States.
"The ideal of the political system that the U.S. offers, in any case, it is more progressive with respect to what Armenia had at the beginning of this year. And what did it have? There are two options to choose from, either there was National Socialism in Armenia, where the leading Republican Party had its own armed units represented by the Nagorno-Karabakh Volunteer Union, i.e. those Armenians who served in the occupied territories of Azerbaijan, and who have always been the force line of the party. Either there was a classical national-church ideology, feudalism. In other words, the country lived in the 21st century with the ideology of the 17th century. Therefore, any ideas that Pashinyan brought to the Armenian society, they are civilizationally more progressive and it is quite understandable that they found a response from among the population. In this sense, it was not the United States that won in Armenia, but Russia that lost Armenia because it did not offer any progressive development model," Kuznetsov said.
But what has served the so-called success of Pashinyan? According to Oleg Kuznetsov, Pashinyan played on the contradictions of the new and old. He put forward a whole system of populist unconfirmed slogans, proposed a new model of the vision of the world and won on this model.
"However, this model is detached from reality as the religious-national model that was offered to the Armenian society by the Republican Party of Armenia. Both were surreal, but Sargsyan's model was gloomy, and Pashinyan's model is so airy and beautiful. Therefore, Armenia went to the west," Oleg Yurevich added.
In support of this, Kuznetsov cited a number of examples exposing Pashinyan's tricky policy, based only on high-sounding phrases.
"Pashinyan speaks beautifully of what they want to hear from him, but otherwise his entire policy is a total failure. He decides to abolish fines that are issued on the basis of registration by traffic control cameras; i.e. to abolish the actions of the law without repealing the law itself – it is an absolute populism.
Pashinyan claims that he is an adherent of a peaceful resolution of Nagorno-Karabakh conflict, even with the use of Stepanakert (Khankendi in Azerbaijani), but on other side, he sends his son to serve in Stepanakert as an “Ercrap”, showing, that Stepanakert is an independent state, which cannot be considered as a subject of  relations.
Pashinyan himself is a journalist, but now he closes the government meeting for the press, despite the fact that opens meetings of the cabinet, which took place over 100 days was one of the requirements. Where is the logic?", historian asks.
According to Kuznetsov, all of these facts indicate that on the one hand, he builds air castles and calls for a brighter future, but on the other hand, he uses the same totalitarian methods of public government that were characteristic of his predecessor.
"The arrest of Kocharyan and Khachaturov – yes, they usurped the power, but then the question arises, and where is the scrutiny of the terrorist act in the national assembly of Armenia on October 27, 1999, when Sargsyan came to power, but not when the power was transferred from Kocharyan to Sargsyan. Moreover, the events of 2008 - yes, they were initiated by Kocharyan and Khachaturov, but Sargsyan received benefits, so why is he not sitting in the dock?
It seems that there is a vision and understanding of foreign policy and, in general, of Armenia's further policy, but its implementation is so fragmented that it is impossible to imagine a complete picture of what is happening in Armenia now. All processes within this country take place contrary to the policy pursued by the current Prime Minister. This probably is the genetic strength of the Armenian people, which allows people to survive all those experiments that are conducted over them. Not every people can survive so many mockeries by their own authorities."
Answering the question, what should be anticipated from the situation over Nagorno-Karabakh conflict, Oleg Kuznetsov claimed, that internal policy determines the external one and occupation will continue until the time while feudal dominants of the religious-mystical worldview will be preserved in the public consciousness.
"As soon as the people in Armenia understand that we live not by the ideology of only our own people, but by the values which are peculiar to the rest of the world and that for their further development they need to step over themselves, then the question of occupation can also be removed. Armenians should ask themselves why they need this black hole to where their human, material and intellectual resources go away without any surplus value” Oleg Kuznetsov concluded.
Interviewed by Anastasia Lavrina