“The cooperation between Azerbaijan and Montenegro is on the rise” - Vugar Aliyev | Eurasia Diary - ednews.net

2750 tonnes of ammonium nitrate stored at Beirut warehouse at centre of explosion
Read: 696 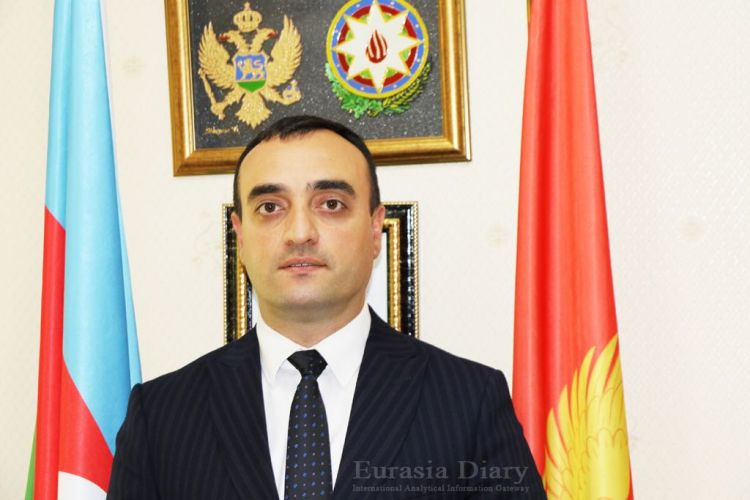 On the 13th of July, Montenegro celebrates its main national holiday - the Day of Statehood. Over the past few years, Azerbaijan and Montenegro have developed a close friendly relationship. The honorary consul of Montenegro in Azerbaijan, Vugar Aliyev, spoke about how cooperation between the two countries is developing.

–  When was the Honorary Consulate of Montenegro to Azerbaijan created and what are its tasks?

–  The consulate has officially operated from December 2013. Firstly, our efforts are aimed at strengthening cooperation between the two countries. We are actively working to deepen relationships in the areas of mutual interest, assist legal entities and individuals, and support representatives of official state bodies and businessmen during their visits, as well as diaspora organisations.

During the time of the consulate’s activities including, amongst others, the political, economic and cultural areas, the two countries have achieved progressive success in mutually beneficial cooperation. The effective achievements of the current level were largely facilitated by friendly relationships between the heads of state and government, as well as the effective work of the diplomatic missions of both countries. The appreciation of our initiatives by the President, the Prime Minister, the Speaker of the Parliament and the official representatives of Montenegro is an excellent incentive for further revitalisation.

–  Today, there is effective cooperation between our countries, and very good relationships have been established. What are the prospects for further expansion of these ties?

–  As an example of positive relationships, I can cite the official visit to Azerbaijan on the 23rd to 25th of June of the delegation of Montenegro, headed by Prime Minister Duško Marković. This visit was of great importance in terms of strengthening the friendship, cooperation and partnership between the governments of the two countries. During the meetings with the official representatives of Azerbaijan, it was noted that mutual visits at a high level are of an intense nature, cooperation in all areas is on the rise and turning into a strategic partnership.

An exchange of views took place on the possibilities of expanding cooperation in the fields of energy, tourism, construction, agriculture and transport, as well as on other issues of mutual interest. They discussed the opening of the Azerbaijani trading house in Montenegro. As part of the growing interest in expanding contacts, it is important to emphasise the stability of the educational factor: many Montenegrin students are now studying at the Azerbaijan Diplomatic Academy.

During the visit of Duško Marković, the second meeting of the Joint Commission on Economic Cooperation of the Governments of the Republic of Azerbaijan and Montenegro was held, and a business forum was organised; this important meeting helped to analyse and evaluate the work on the development and strengthening of bilateral cooperation in all spheres.

Leaders of more than 150 companies representing different sectors of the economy took part in the business forum along with government officials from both countries. Forum participants were provided with information about the favourable investment environment created in Montenegro, and were given a presentation on the programme of economic passport and tourism potential. I am confident that this visit and fruitful meetings will make a significant contribution to the development of bilateral relations.

If we talk about prospects, then, as noted at the business forum, the trade turnover between Azerbaijan and Montenegro increased last year. However, the current situation does not reflect the full potential of both countries. To date, the country has already signed 17 contracts, and work is underway on another five.

Speaking at the forum, Duško Marković said that “Azerbaijan is the main direct foreign investor in Montenegro. Currently, we are interested in the development of the northern regions of Montenegro. In this connection, cooperation with Azerbaijan in the fields of agriculture, transport and infrastructure can be interesting. We are inviting Azerbaijani investors to invest in these areas, and for our part, we provide a wide range of investment-stimulating activities”. I think these words clearly show the broad prospects for the further expansion of cooperation.

It should also be noted that relationships between Azerbaijan and Montenegro are based not only on the state and business but also on the level of relationships between the citizens of the two countries. Since 2013, Montenegro has become one of the popular summer holiday destinations for Azerbaijani tourists. Since 2015, for the period of the summer vacations, Montenegro has introduced a 90-day visa-free regime for Azerbaijani citizens. It is very convenient for tourists and does not burden them with the need to spend time on obtaining visas.

The second important factor is the availability of direct flights; charter flights between Azerbaijan and Montenegro have been implemented for several years and are characterised by their good profitability.

Today, Montenegro is becoming increasingly popular around the world as a country tour operator. It has magnificent nature, beautiful beaches, wonderful national cuisine, a clean environment, and historical and cultural monuments. Many citizens of our country who have visited Montenegro emphasise the friendliness and openness of the local population, expressing a desire to visit the country again.

–  What are your wishes on the eve of the national holiday of Montenegro?

–  Montenegro is one of the smallest countries in the Balkans and the Adriatic Sea region, both in territory and in terms of population, and has been developed as a stable, democratic and multinational country. Since 2017, it has been a full-fledged member of NATO and is a candidate for accession to the European Union. On the 13th of July, Montenegro celebrates the most important date; on this historic day in 1878, the country gained independence at the Berlin Congress and was recognised as the 27th independent state in the world. The symbolism of this day lies in the fact that on the 13th of July 1941, Montenegro launched an anti-fascist movement.

Allow me on behalf of the consulate to congratulate the leadership and the people of Montenegro on their holiday, and to wish the country further development and prosperity!