India is ready to abandon the Su-57 and focus on buying the American F-35s
Read: 328

At least 481 people arrested in Paris so far Saturday amid new round of Yellow Vest protests, says premier 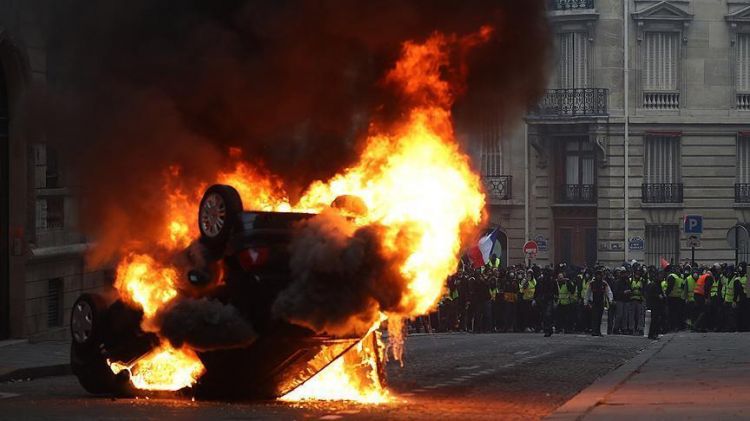 French police used pepper spray against Yellow Vest protesters along the Champs-Elysees in the capital Paris on Saturday.

The police allowed the protesters onto the street after doing security searches.

On the Champs-Elysees, tension among protesters and police ran high.

The number of people arrested during Saturday’s protests rose quickly to 700, according to figures from Laurent Nunez, France’s Deputy Interior Minister.

Speaking to France 2 TV, Nunez said that around 31,000 people took part in protests across the country, Anadolu Agency reported.

The mounted officers advanced behind ranks of police on foot holding up their shields like Roman legionaries, NZ Herald reported.

In front of them, on the fashionable Rue de Bretagne in central Paris, were the "yellow-vest" protesters and masked, black-clad youths, sending shoppers and patrons of pavement cafés scurrying indoors for cover.

"No one was expecting trouble in this area," Françoise Perrin, 43, an observer.

Perrin, one of dozens of Parisians and tourists in the historic Marais district caught between a mob of protesters and riot police on horseback, added: "We were just about to order a drink, then we looked up and saw what looked like a military formation heading towards us. Then we looked the other way, and saw the protesters. We got the fright of our lives."

The police managed to prevent the mob from looting shops, smashing windows or attacking parked cars, pursuing them through the narrow medieval streets of one of Paris's oldest and most picturesque quarters.

But other parts of Paris were severely battered by clashes. An estimated 10,000 demonstrators marched through the streets on a "day of rage" as the authority of Emmanuel Macron, the President, was challenged by a fourth consecutive weekend of protests across France.

There were an estimated 125,000 protesters across France, with 1385 arrests - a record for a single day in postwar France. More than 700 were detained in Paris alone. At least 135 people were injured, including three police officers. The emblematic Parisian avenue, the Champs-Elysées, was shrouded in tear gas and echoed to the sound of stun grenades as police battled a crowd of more than 1000, who sang the Marseillaise and chanted "Macron resign".

Police demolished burning barricades with armoured vehicles, deployed for the first time in the heart of Paris. Officers fired repeated salvoes of tear gas and water cannon to drive back and disperse protesters. But they regrouped and moved on, sometimes returning to confront the police minutes later.

A ring of steel surrounded the President's Elysee Palace - a key destination for the protesters - as police stationed trucks and reinforced metal barriers throughout the neighbourhood.