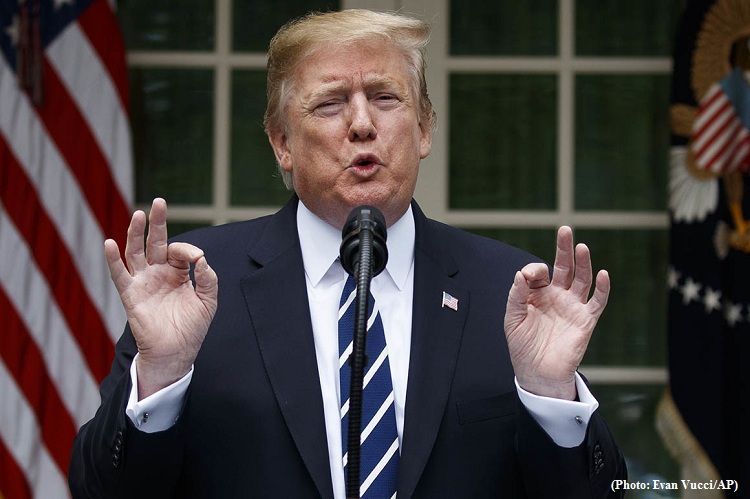 President Trump used a campaign rally in North Carolina on Wednesday to stoke his supporters’ anger over a group of four minority, progressive Democratic congresswomen, drawing boos and chants of “send her back” when he ramped up his attacks, The Hill reports.

The scene laid bare Trump’s effort to use the group to frame Democrats as extreme ahead of the 2020 election but also fueled the notion that he is seeking to exploit the nation’s racial divisions for political gain.

“The leading voices of the Democrat Party are left-wing extremists who reject everything our nation stands for,” Trump told the crowd in Greenville, N.C. “These left-wing ideologues see our nation as a force of evil.”

The president then mentioned each of the four Democratic lawmakers by name, running through a laundry list of quotes he said proved they are out of the mainstream. When Trump was in the middle of a diatribe against Rep. Ilhan Omar (D-Minn.), the crowd broke into chants of “send her back.”

The president continued his days-long attack against Omar, a naturalized U.S. citizen from Somalia, over her past statements about al Qaeda, the Sept. 11, 2001, terror attacks, ISIS and Israel.

Trump also mocked Rep. Alexandria Ocasio-Cortez (D-N.Y.) by refusing to call her by her full name. “We’ll call her Cortez. Too much time,” he said.

He joked Rep. Ayanna Pressley (D-Mass.), who is black, could be related to the singer Elvis Presley and of Rep. Rashida Tlaib (D-Mich.), he said “that's not somebody that loves our country.”

“They never have anything good to say. That’s why I say, ‘hey if they don’t like it, let them leave. Let them leave,’ ” Trump said. “They’re always telling us how to run it how to do this — you know what, if they don’t love it, tell them to leave it.”

The comments at the rally, which took place in a state Trump won narrowly in 2016, were a chance to road test his attacks in front of a friendly crowd. The audience’s boisterous reaction was reminiscent of the “lock her up” chants Trump’s supporters use against former Democratic presidential nominee Hillary Clinton.

But the broader reaction could be a test of whether the strategy will backfire. More than 20 percent of registered voters in North Carolina are black and the state backed former President Obama in the 2008 election.

Trump set off a firestorm on Sunday when he tweeted the female progressive lawmakers “who originally came from countries whose governments are a complete and total catastrophe” should “go back and help fix the totally broken crime infested places from which they came.” All four congresswomen are U.S. citizens.

The tweets were met with fierce backlash from Democrats and a handful of Republicans who decried them as racist. The House formally voted to condemn the comments on Tuesday.

But Trump has dug in, blasting the members of the self-described “Squad” in each of the past four days and asserting his tweets were not racist.

The president has indicated he believes the fight is politically beneficial, seeking to make the four congresswomen the face of the Democratic Party.

He also sought to push back against the notion that his attacks could hurt him with suburban and female voters in next year’s election, in part by acknowledging people in the crowd holding “Women for Trump” signs.

“They say women don’t love Trump. I think they do,” he said, arguing they support his policies on taxes, law enforcement and the military.

Just before Trump landed in North Carolina, the House voted 332-95 to table articles of impeachment against the president. Rep. Al Green (D-Texas) introduced the measure in response to Trump’s tweets about the four congresswomen.

Trump addressed the vote at the top of his remarks to supporters, calling the measure “stupid," describing the vote as “lopsided” and decrying the effort to remove him from office as a “disgrace.”