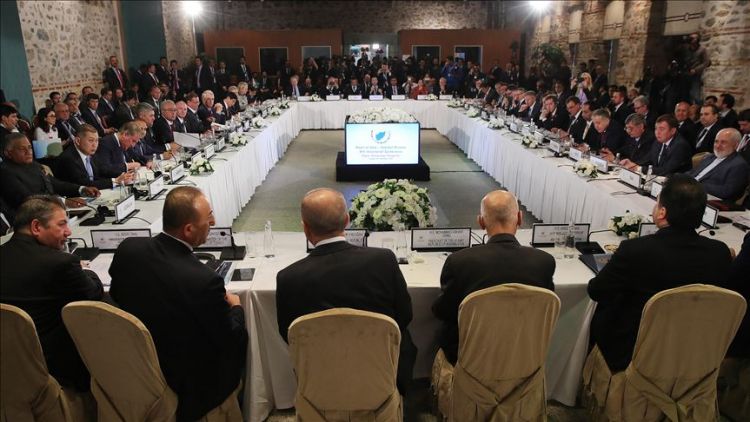 The conference held in the Turkish city of Istanbul called for an effective dialogue between Afghanistan and its neighbors on all issues of common interest and importance for the region.

The declaration adopted at the end of the conference late Monday called for concerted regional and international cooperation to ensure elimination of terrorism in all its forms and manifestations, including dismantling of terrorist sanctuaries.

The document added that while Afghanistan has been fighting the war against terrorism, 15 countries participating in the conference reiterated support for the efforts of Kabul government and people of Afghanistan towards peace and reconciliation with the Afghan Taliban.

"We recognize that an inclusive politically negotiated settlement remains key for durable peace in Afghanistan. We acknowledge all intra-Afghan efforts leading to cessation of violence and durable peace in Afghanistan, including the Moscow Format Consultations, China-Russia-US trilateral consultations on Afghanistan and the China-Russia-US-Pakistan four-party meeting, Kabul Process and the continuation of the US talks with the Taliban that leads to the immediate cessation of violence and lasting peace in Afghanistan. We therefore stress the central importance of a comprehensive and inclusive Afghan-led and Afghan-owned political process towards a peaceful resolution of the conflict and a comprehensive political settlement and welcome real progress in this regard," read the statement.

The Heart of Asia - Istanbul Process is a regional initiative of Turkey and Afghanistan, which was launched in 2011. It has two chairs with Afghanistan as the permanent chair, and a co-chair from among the member states that shifts each year.

The declaration also acknowledged the recent gains by the Afghan security forces in eastern Nangarhar province against Daesh or ISIS, where hundreds of its terrorists were disarmed and its base destroyed and dismantled.

It also called on all the concerned parties to work ensuring direct peace talks for a political settlement and lasting peace in Afghanistan.

“While recognizing the importance of the contributions of neighboring countries and regional partners in this process, we urge all those countries in the region and beyond to use their leverage and influence to bring the Taliban to the negotiation table for the purpose of finding a peaceful and permanent political solution to the conflict in Afghanistan. We stress the necessity of meaningful participation of women in the peace processes”.

"We commend countries in the region and beyond for their hospitality and all kinds of support in hosting millions of Afghan refugees for four decades. We acknowledge the role of regional and neighboring countries in particular Iran and Pakistan in hosting Afghan refugees for such a long time and call for creating conducive conditions in Afghanistan for voluntary, safe dignified and sustainable return of the refugees to their homeland," said the statement.