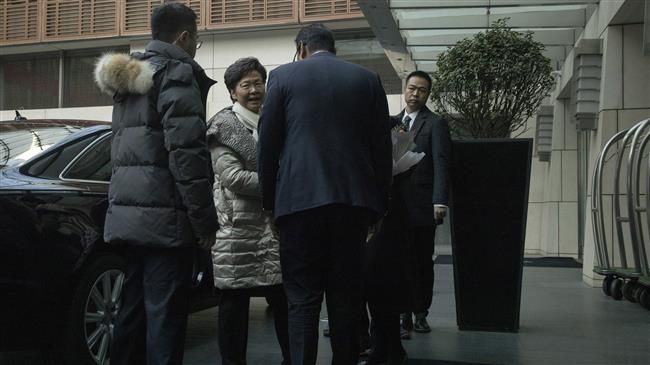 The Hong Kong leader has left for the Chinese capital, Beijing, to meet President Xi Jinping and discuss the political and economic situation in the Chinese territory, which has plunged into chaos over the past six months, Eurasia Diary reports citing Press TV.

Hong Kong Chief Executive, Carrie Lam, is scheduled to meet President Xi on Monday and hold meetings with other senior officials during the four-day visit, according to local media.

The Chinese ruled city has been rocked by turbulent protests since June, when the government proposed a bill that would allow extraditions to mainland China. The bill was later suspended indefinitely, but the protests continued and became violent.

More than 5,000 people have been arrested during the protests that have taken an increasingly violent form.

Many protesters are angry at the government of Lam, charging it with failing to address their issues.

Earlier this week, Lam said she will focus her efforts on restoring law and order to her city.

A report, however, said back in November that the Chinese leadership has set up a crisis command center and is considering replacing Lam.

But the Ministry of Foreign Affairs’ Office in Hong Kong called the report “false.”

“No matter how the situation in Hong Kong changes, the Chinese government’s determination to safeguard national sovereignty, security, and development interests is unwavering,” it said in a statement.

Hong Kong has been governed under a “one-country, two-system” model since the city — a former British colony — was returned to China in 1997.

The Chinese government says the United States and Britain have been fanning the flames of unrest in Hong Kong by supporting the protesters.

It has repeatedly urged Washington, and other foreign states critical of its internal policies, to stop interfering in its affairs, especially those related to Hong Kong, Taiwan and the western province of Xinjiang.

Chinese Foreign Minister, Wang Yi, said on Friday that the administration US President, Donald Trump, has "deliberately attacked and discredited China on issues of national sovereignty and dignity.”

Washington has recently introduced several pieces of legislation that could potentially target top Chinese officials with sanctions over what it alleges as human rights abuses in Hong Kong and China’s western Xinjiang Province.

China strongly denounced the legislation, calling the move a serious case of interference in its internal affairs.