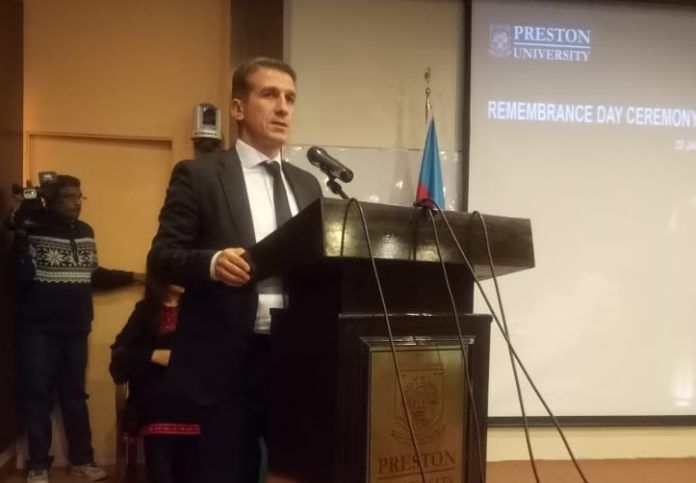 The Ambassador of the Republic of Azerbaijan Ali Alizada has said that the Azerbaijani nation always remembers that Pakistan was one of the first Countries to recognize Azerbaijan as an independent State, and that it never established its relations with the aggressor Armenia, Eurasia Diary reports citing the Dispatch News Desk (DND) news agency.

His remarks came when he addressed an event titled “Remembrance Day Ceremony of 20 January Martyrs of Azerbaijan” held at Preston University in Islamabad on Monday to mark Black January.

In his address at the event, Ambassador Ali Alizada said that January 20 was the beginning of independence of Azerbaijan.

The ambassador said that on January 19-20, 1990, 147 civilians were killed and 744 were seriously injured when 26,000 soviet troops assaulted various Azerbaijan’s Cities including Baku.

Ali Alizada stressed upon an impartial assessment of events that led to the January 20 tragedy. He noted that the basis of all these calamities was the baseless territorial claims of the Armenians, who were massively resettled in the region, especially in the historical lands of Azerbaijan since the early 19th Century,

The Azerbaijan’s ambassador said that we value that Pakistan does not establish its foreign relations with Armenia in love and respect of Azerbaijan.

The Chancellor of Preston University Dr Abdul Basit also delivered his remarks at the event.

Earlier an Art Exhibition was also held at the Exhibition Hall of Preston University.

In the end, prizes were distributed among students who got positions in the Art Exhibition.