Erdogan’s visit to Pakistan will be comprehensive - Imran Khan 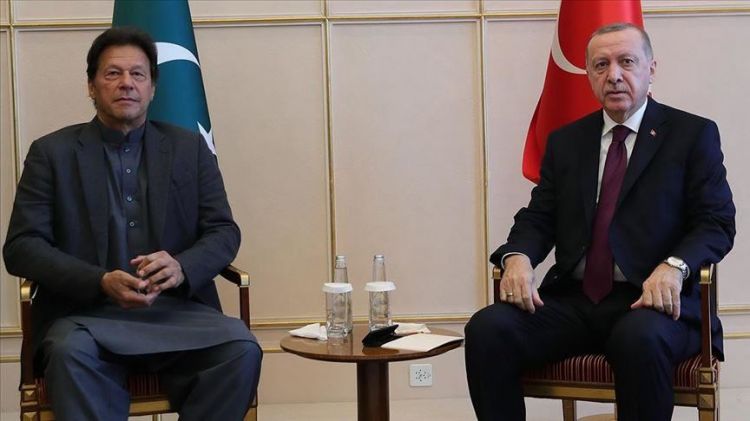 During a two-day visit to Pakistan this week, Turkish President Recep Tayyip Erdogan and Pakistan's Prime Minister Imran Khan are expected to discuss a string of issues confronting the Muslim world, with special focus on the U.S.’ so-called peace plan and the Kashmir situation, Eurasia Diary reports citing Anadolu Agency.

"The two leaders have a variety of issues to discuss during this visit including the Kuala Lumpur initiative, Kashmir, and the U.S.’ so-called Middle East peace plan,” Shahid Amin, a former diplomat, told Anadolu Agency.

Amin said both Khan and Erdogan feel strongly about the lack of unity among Muslim countries, and discussions of the issue will be an important part of the agenda.

"An initiative has already been taken in this regard,” he said referring to last December’s Kuala Lumpur summit, which Pakistan skipped over reported pressure from Saudi Arabia.

"But it needs to be worked out further so that there must not be any impression of more division,” he said.

"Saudi Arabia and its allies are not happy with the Kuala Lumpur initiative, considering it a parallel platform, but it is equally true that Muslim world needs to be re-energized in the face of simmering challenges, especially after the announcement of Trump's so-called peace plan.”

“President Erdogan is an old friend of Pakistan and he fully understands our constraints” leading to Islamabad sitting out the summit, Amin, whose diplomatic career spanned from 1958 to 1997, told Anadolu Agency.

“I am confident this visit will be a success and will bring the two nations further closer,” said Amin, who served as Pakistan’s ambassador to Libya, France, Nigeria, and Saudi Arabia.

Abdul Khalique Ali, a Karachi-based political commentator, sees Erdogan's visit to Pakistan as a result of growing understanding and cooperation between the two nations on several regional and international issues.

"The two sides have similar stands on several issues ranging from the ongoing situation in Kashmir to Trump's ‘peace plan,’ and from reconciliation in Afghanistan to Nagorno-Karabakh,” Ali told Anadolu Agency.

"Turkey was among a few nations that helped Pakistan escape the blacklist of the FATF [intergovernmental Financial Action Task Force],” he said.

"It's Turkey that has kept Pakistan's interests equal to its own interests.”

The two sides, he said, would also discuss ways to further bolster economic and strategic cooperation.

Erdogan will arrive in Islamabad on Thursday for a two-day official visit, Pakistan’s Foreign Ministry confirmed on Monday.

This will be Erdogan’s fourth visit to Pakistan since 2002 and second as president.

His last trip to the South Asian state in November 2016 was his first since assuming the presidency in August 2014.

He previously visited Pakistan twice during his tenure as prime minister.

Erdogan will be accompanied by several Cabinet ministers and a delegation of Turkish businessmen and investors.

On Friday he will address Pakistan's parliament for a record fourth time.

Erdogan already holds the distinction of being the only head of state to have addressed the country’s parliament three times.

Khan, in an interview with Anadolu Agency earlier this month, said Erdogan’s visit will be “comprehensive” and Pakistan will seek Turkey’s cooperation in several sectors.

He identified mining and technology transfer as key areas, saying that boosting bilateral trade and economic ties is a core objective.

“It will be quite a comprehensive visit … there will be discussions on all sorts of economic ties and, of course, our strategic and diplomatic ties,” said Khan.

On Monday Khan presided over a special meeting in the capital Islamabad to review preparations for Erdogan’s visit.

According to an official statement, he and his Cabinet members discussed ways to further bolster Pakistan and Turkey’s bilateral ties and economic cooperation.

“President Erdogan’s visit will serve as an important milestone in our efforts to further strengthen bilateral relations and increase cooperation between our two countries,” Khan said at the meeting.

He directed his ministers to hold monthly meetings to ensure timely implementation of the agreements set to be signed during the visit.

Khan also hailed Turkey for its unwavering support to the people of the disputed Jammu and Kashmir region, which has been under Indian government lockdown since last August.

“The way Turkey stood with Pakistan on the Kashmir issue is highly commendable,” said Khan.

“We will warmly welcome the Turkish president in Pakistan. He is not only leading the Turkish nation but is also a voice for all the oppressed Muslims in the world,” Senator Siraj-ul-Haq told Anadolu Agency.

“I hope this visit will further strengthen our relations as Pakistan and Turkey have always supported each other in trying times,” said the senator, who is also chief of the country’s largest mainstream religious party, Jamaat-e-Islami.

Ordinary Pakistanis are also upbeat about Erdogan’s visit, with many messages of support seen on Twitter and Facebook.

“Welcome President Recep Tayyip Erdogan to Pakistan,” Aamir Chishti tweeted in Turkish, with a short video of Erdogan and the flags of the two countries.

Ankara and Islamabad have boosted bilateral defense and security cooperation in recent years. In October 2018, the Pakistan Navy commissioned a 17,000-ton fleet tanker built in collaboration with a Turkish defense company in the southern port city of Karachi.

It was the largest warship ever constructed in the Karachi Shipyard and Engineering Works, and the project was completed in collaboration with Turkish defense contractor STM.