An artillery attack on a second US military convoy in Syria
Read: 892

Team of specialists from Russian armed forces arrives in Armenia to assist in struggle against COVID 19
Read: 507 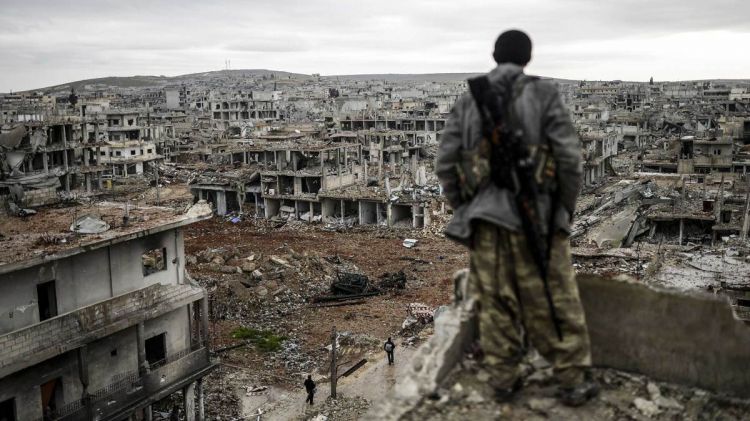 The European Council called on Friday on parties to the Syrian conflict to immediately cease hostilities in the province of Idlib as well as respect their obligations under the international humanitarian law, Eurasia Diary reports citing Sputnik.

“The EU calls on all actors to cease hostilities immediately. The EU urges all parties to the conflict to fully respect their obligations under international humanitarian law and international human rights law and to allow unimpeded and direct humanitarian access to all those in need", the council said in a statement.
Brussels also renewed its call on all the parties to ensure a sustainable ceasefire and fully implement the Sochi Memorandum of 17 September 2018, as well as reaffirmed its commitment to the UN Security Council Resolution 2254 and the Geneva Communique.
Accountability for violations of international humanitarian and human rights law is of utmost importance. For this reason the EU reiterates its call for the situation in Syria to be referred to the International Criminal Court", the European Council added.

On Thursday, the Russian Defence Ministry said that pro-Turkish militants, supported by Turkish artillery, had breached the defences of the Syrian army near the villages of Qmenas and Nerab in Idlib. Russia's Su-24 jet opened fire at the militants, helping the Syrian troops to repel the advancing fighters, the Russian military added. The Turkish Defence Ministry later reported that two Turkish soldiers had been killed and five injured in an air attack in Idlib, adding that over 50 Syrians had been killed as a result of the retaliatory fire.

The situation in Idlib has escalated recently, as the Turkish army has carried out several strikes against the Syrian Arab Army after five of its servicemen were killed by Syrian forces at an outpost in the rebel-controlled province of Idlib - the last major stronghold of jihadists in the country, prompting President Erdogan to threaten a full-scale military offensive in Idlib at "any minute".

According to the Turkish president, the country's servicemen "had been deployed to the region to prevent conflicts in Idlib", while Damascus said the armed factions in Idlib province had ignored the ceasefire agreement and repeatedly attacked Syrian government forces.

In May 2017, Turkey, Russia, and Iran, as the guarantors of the Syrian ceasefire, agreed during talks in Nur-Sultan (formerly, Astana) to create four de-escalation zones in Syria. Damascus gained control over three of them in 2018, but the fourth, located in Idlib and parts of several neighboring provinces, is mostly controlled by the Hayat Tahrir al-Sham (formerly known as Al-Nusra Front*). In September 2018, Russia and Turkey agreed to create a demilitarised buffer zone in the province, where more than 10 different armed factions are operating along with Tahrir al-Sham.

Earlier in February, Russian Foreign Minister Sergey Lavrov said that Turkey had not fulfilled several key commitments on Idlib, including its failure to distinguish between the armed opposition, which is ready for dialogue with the government within the framework of the political process, from terrorists. In turn, Turkish Vice President Fuat Oktay has claimed that Ankara had fulfilled its obligations in Idlib.