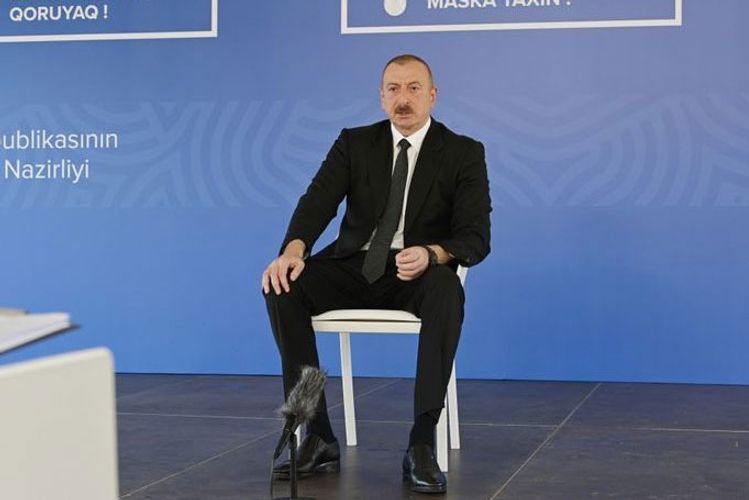 "The prime minister of Armenia says, “Karabakh is Armenia”. I answer this, and answer properly. But why doesn’t the Minsk group respond to this? Why doesn’t it answer that this expression violates the essence of the negotiations formed by the Minsk Group and actually makes them meaningless? Did the Minsk Group co-chairs respond adequately to this? They did not!" President Ilham Aliyev said in an interview with local TV channels on July 6, EDNews.net reports citing APA.

"For two years now, the Armenian side has been trying to change the format of negotiations, stating that Azerbaijan should negotiate with self-styled and fictitious “leaders” of the so-called Nagorno-Karabakh. Is there an adequate answer to this? There is not! An answer is issued using some abstract words in order to please both sides. But that time has already passed. We demand clarity. Who is taking these steps? Armenia!

We are committed to the format of negotiations and take their essence as a basis. Of course, we are not satisfied with everything, but we have made it clear what suits us and what doesn’t. What does Armenia do? By declaring that “Karabakh is Armenia” it draws a line through the essence of the negotiations. Ideas about the need to change the format of negotiations make them meaningless. Should there be an adequate reaction to this or not?! The fictitious president of the far-fetched Nagorno-Karabakh republic who was not elected as a result of fictitious elections holds an inauguration ceremony in Shusha. Is this an adequate answer? After all, this is an open provocation. Until now, the unrecognized criminal Nagorno-Karabakh regime has held several "elections", triumphs in Shusha. Why is there no adequate reaction to this? Why isn’t it stated that this is a provocation for which Armenia will be held responsible?

I am the one talking about this, but it should be them doing that if they want the issue to be resolved peacefully. What is the main thesis of their statement? A military option is impossible. Who said that? Open the UN Charter and see if countries have the right to self-defense or not? Who do you think you are?! Are you above the UN?! Are you above the UN Charter?! In this case, they should say: we, the co-chairs of the Minsk Group, believe that the thesis reflected in the UN Charter is wrong. After all, there is a limit to everything. Therefore, we expect more serious, specific and focused statements from them. Armenia is engaged in illegal settlement of the occupied lands. I have repeatedly raised this issue. Members of our delegations in all international organizations have been instructed: this issue should be the number one issue on their agenda. Are the Minsk Group co-chairs making a statement on this issue or not?! The last OSCE fact-finding mission visited the occupied lands 10 years ago. Ten years have passed. Over the past few years, we have been insistently telling them that a new mission should be sent. For the past 10 years, Armenia has been bringing Armenians from Syria and other places there, forcibly holding them, changing the historical names of our cities and building churches in the occupied lands. So they will say tomorrow that this is Armenian land. We have repeatedly told them. Is there a reaction? There is not! Was it impossible to send a fact-finding mission in 10 years? They are not interested. What will they see when they arrive there?! They will see that there is an ongoing settlement.

Ten years ago, they reflected this in their report. They probably don’t want to reflect this now. Has the Minsk Group made a statement about this? It hasn’t! You know, we are trying to be patient and constructive. But there are almost no negotiations now. The video conferences of the foreign ministers of Armenia and Azerbaijan have no meaning whatsoever. This simply shows that the Minsk Group is doing something. But how much longer can this last? To do something means to do something. I said that we would not negotiate for the sake of imitation. We want to negotiate on the merits. They have now come up with the expression of “substance negotiations”. They came up with this expression themselves, its essence is clear – yes, without changing the format of the negotiations and without supplementing the subject of negotiations on the table. In this case, of course, we will participate in the negotiations. Otherwise, there is no need for meaningless negotiations. This is exactly what we expect from the Minsk Group and are firm in our position. Justice is on our side. We proved our cause both in the international arena and on the battlefield, and let no-one forget about the April battles," said Azerbaijani President Ilham Aliyev.