'Turkey will not hesitate to stand against any kind of attacks against Azerbaijan's rights, law and soil' - Erdogan | Eurasia Diary - ednews.net

The refusal of Kocharyan-Sargsyan blocs to recognize results of elections is tactical character - Expert
Read: 429

Common understanding is impossible between US and Iran during presidency of Raeisi - Expert
Read: 216

Without the support of NATO, the UK cannot give a serious response to Russian strike - Expert
Read: 198

Cooperation and security without dividing lines is a common goal of countries - Putin
Read: 196

'Turkey will not hesitate to stand against any kind of attacks against Azerbaijan's rights, law and soil' - Erdogan 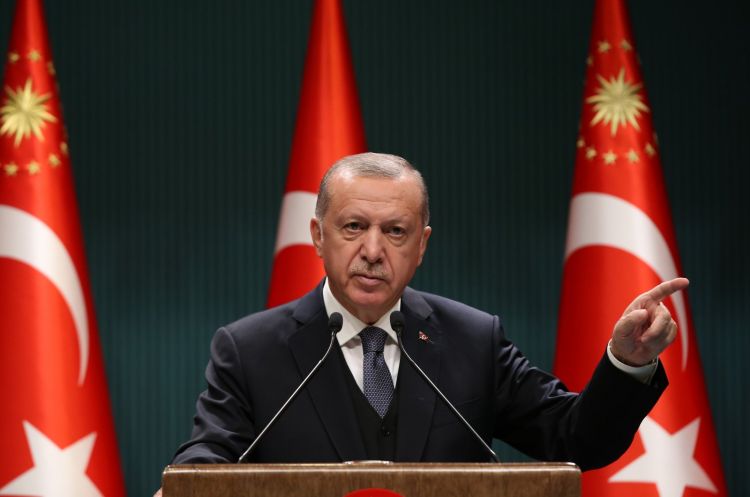 "We strongly condemn the attack by Armenia against friend and brother Azerbaijan," he said.

At least seven Azerbaijani military personnel, including one general and a colonel, were killed in fresh border clashes with Armenia in the Tovuz region Tuesday.

That brought the total number of Azerbaijani deaths to 11 since border clashes on Sunday reignited the simmering Azerbaijan-Armenia territorial conflict.

Erdoğan stressed Turkey's concern over the tension that has been going on since the invasion of Upper Karabakh turning into conflict with Armenia's "reckless and systematic attacks."

Upper Karabakh is the internationally-recognized territory of Azerbaijan and has been illegally occupied with Armenian military aggression since 1991.

Erdoğan underlined that the attack carried out on the borders of the two states with heavy weapons shows that it was a deliberate attack on Azerbaijan.

"This attack goes beyond the diameter of Armenia. The aim is both to block the solution in the Upper Karabakh and to reveal new conflict areas."

"Turkey will not hesitate to stand against any kind of attacks against Azerbaijan's rights, law and soil," Erdoğan added.