Azerbaijan to respond with all its might to any aggression - Azerbaijan ambassador to Turkey | Eurasia Diary - ednews.net 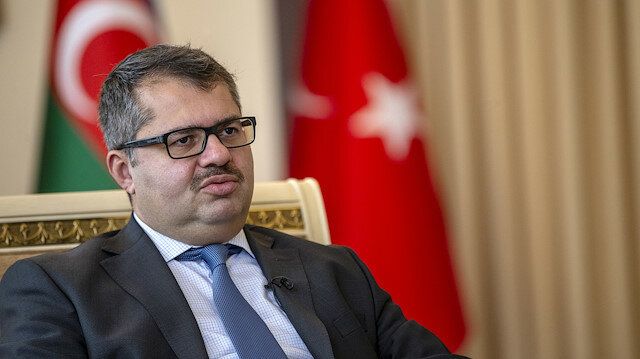 Azerbaijan will use all its power to respond to any aggression, top Azerbaijani envoy in Turkey said, referring to a recent attempted cross-border attack by Armenian troops on Azerbaijan's northwestern Tovuz area.

"Whenever there would be and is any aggression against us, we will respond with all our might and with all our capabilities, and we have full rights for that. So nobody should dilute itself on that," Khazar Ibrahim, Azerbaijan's ambassador to Ankara, told Anadolu Agency in an exclusive interview.

The situation is still quite tense and the skirmishes continue at the border, he said, pointing out that Armenia has been engaged in illegal military aggression against Azerbaijan since July 12.

The Armenian army violated a cease-fire and attempted to attack Azerbaijani positions with artillery fire towards the Tovuz border district, withdrawing after suffering losses following retaliation from the Azerbaijani army. The Armenian troops to date martyred 12 Azerbaijani soldiers, including high-ranking officers, and one civilian, besides wounding four troops.

Azerbaijan has the full right on the international rule of law for response and self-defense under Article 51 of the UN Charter, and all other provisions, norms, and principles of international law.

"Therefore, Azerbaijan responded accordingly, and we inflicted a lot of damage on Armenian troops which have instigated this aggression against Azerbaijan."

The ambassador said it was not the first time Armenia going into this kind of provocations, stating that usually, it used to attack the area of Upper Karabakh, and seven other occupied regions of Azerbaijan, while this time the clashes were right on the frontier, across the border between the two South Caucasus states.

Given the "very complicated and quite difficult" internal situation in Armenia, Ibrahim said there were a lot of clashes between the current and previous administrations in Armenia with lots of disagreements and arrests inside the country.

He added that there was also great "disappointment" by Armenians on their leaderships’ dealing with the COVID-19 pandemic.
"One of the reasons why Armenian leadership took these steps [clashes with Azerbaijan] is probably to change these internal dynamics. And if we build this logical chain, we can see that the reason behind hiding the numbers of fatalities and casualties [suffered by Armenia] could be exactly for that reason."

Azerbaijan many times stated that the Armenian side was hiding its losses at the border.

The ambassador stressed that the goal of Armenia was "probably to consolidate the internal position," saying that if the public would know that there were "a lot of casualties and fatalities" at the Armenian side, that would "backfire" and make the position of the current government even more difficult.

He said hiding the truth is impossible in today's world with the use of social media, adding that the government of Azerbaijan has always been very transparent on that.

"We have always, how hard it could be, clearly said what happened on the front line, or, in this situation, on the border between Armenia and Azerbaijan."

"Rationality is not, unfortunately, the strongest part of the mind of the Armenian leadership."

Another reason behind Armenian provocations against Azerbaijan, Ibrahim argued, was attracting the international reaction and involving other parties in the conflict.

Ibrahim recalled that Azerbaijan is not a party to any collective defense institutions or arrangements, while Armenia is a member of the Collective Security Treaty Organization (CSTO).

The CSTO, with Russia, Armenia, Belarus, Kazakhstan, Kyrgyzstan, and Tajikistan as the member countries, on July 14 expressed "serious concern" over the escalation of the situation along the Armenian-Azerbaijani border.

"This time, when Armenia is trying to provoke Azerbaijan to do something on the Armenian purpose across the border, they would expect others to step up, since they have collective security or collective defense arrangements, and they did not hide it. Immediately, they referred to the Collective Security Treaty Organization and called for a meeting on this."

Targeting Azerbaijani strategic projects have always been part of the policies of Armenia, Ibrahim said, referring to the joint energy and transport projects conducted by Baku and Ankara.

Ibrahim said he remembers as Armenians were threatening to attack the Mingachevir water reservoir and Baku-Tbilisi-Ceyhan (BTC) pipeline, adding that it came "from the mouth of the officials from the Republic of Armenia."

The BTC pipeline delivers Azerbaijani light crude -- mainly from the Azeri-Chirag-Guneshli field -- through Georgia to Turkey's Mediterranean port of Ceyhan for further export via tankers.

"We should think clearly, and should not ignore this kind of possibility, but also, from another side, it is not only us, but it is also the international community which should take it very seriously."

The top envoy stressed that these projects are providing energy security not only for Azerbaijan but for the whole world.

"This kind of behavior is reminiscent of the rogue states and rogue regimes," he added.

"Therefore, the international community should give a clear indication and also see the picture more clearly, and state their positions very openly that rogue behavior and threatening the international and national infrastructures are absolutely unacceptable."

"Let me express our sincere, deep, and overwhelming appreciation to the position of President Recep Tayyip Erdogan, the brotherly Turkish nation, the entire government, ordinary people, everybody. Of course, we expected that one nation two states is not just a phrase," he said.

Ibrahim noted that it was "so overwhelming" that it even surprised many that Turkey was even "so straightforward" in demonstrating its support for Azerbaijan amid the recent border clashes.

He underlined that assuming a supportive stance for Azerbaijan, the Turkish leader and the entire Cabinet referred to the international law, adding that: "It was not a threat to anybody, it was rather the message to stop the threats of use of force."

"The threat of use of force, and use of force against a sovereign nation is one of the major principles which are prohibited under the UN Charter. So, therefore, the Turkish position was very much within the norms and principles of international law," Ibrahim said.

Referring to the potential of Armenia and their armed forces, Ibrahim said: "Well, it is not a secret to anybody that they [Armenia] do not have the greatest capabilities in the world, neither in the world, nor in the region, and even in the region they are not by far among the strongest."

He stressed that they have to "get the capabilities from somewhere."

"Where they are getting the most capabilities from, how they are using it, how much they are allowed to use these capabilities is probably a very big issue."

“We cannot exclude anything,” the envoy said when he was asked about the possibilities of the clashes turning into more tense actions, such as a war.

The position of Azerbaijan has always been very straightforward on defending itself, he said.

"At the same time, much does not depend on us, much depends on the rationality of those who may give the orders to the troops on the border. If they continue this way, they will get an overwhelming response."

Ibrahim said it is also very important to call on all those who "actually bear responsibility" to help to solve the conflicts in the region.

The Organization for Security and Cooperation in Europe (OSCE) Minsk Group -- co-chaired by France, Russia and the US -- was formed to find a peaceful solution to the Upper Karabakh conflict but has yet to get any results.

"Instead of giving quite fuzzy statements without distinguishing between aggressor and the victim, without clearly stating the norms and principles of international law, which are violated, they [OSCE Minsk Group] should take a strong position, just position, rightful position to stop it, because if this goes out of control, this will harm not only regional interest but also the global interest."
The ambassador highlighted that Azerbaijan is very disappointed with the Upper Karabakh negotiations conducted with the involvement of the OSCE Minsk Group. "We cannot continue negotiations forever!"

He said the Armenian side from time to time with a couple of year breaks, deviates from the position and the negotiations are going back to point zero.

"They should realize that we cannot continue diplomacy only for the sake of diplomacy. Diplomacy needs to solve the issues rather than prolonging them."

"We do not claim territories of other nations, the only thing we are referring to is international law and the norms and principles which cannot and should not be violated. You should support the justice, and if you do not support the justice, tomorrow the bell can ring on you."

The two former Soviet republics have long been locked in a conflict over Upper Karabakh.

Upper Karabakh, an internationally recognized territory of Azerbaijan, has been illegally occupied since 1991 through Armenian military aggression.

Four UN Security Council and two UN General Assembly resolutions, as well as decisions by many international organizations, refer to this fact and demand the withdrawal of the occupational Armenian forces from Upper Karabakh and seven other occupied regions of Azerbaijan.

This news is originally published in Anadolu Agency.