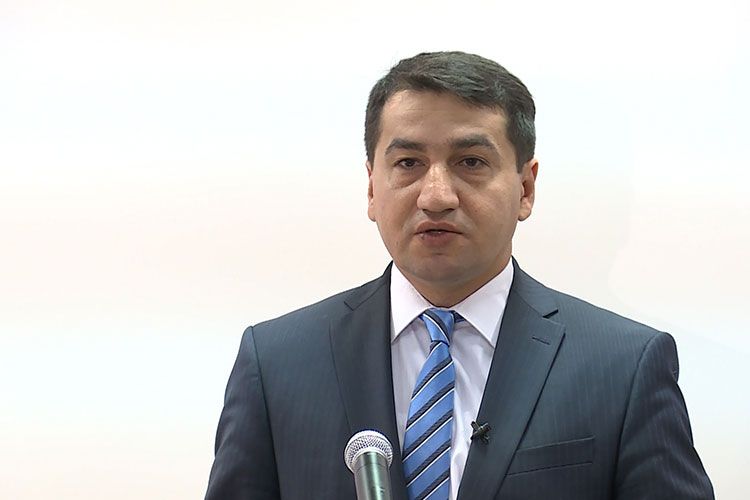 Assistant to the President of Azerbaijan, Head of the Foreign Policy Department of the Presidential Administration Hikmet Hajiyev was interviewed by the Canadian television channel CTV News, EDNews.net reports citing APA.

In an interview to CTV News H. Hajiyev noted that after the collapse of Soviet Union Azerbaijan suffered from military aggression of Armenia and 20% of territories of Azerbaijan have been occupied by Armenia and ethnic cleansing was conducted in the occupied territories.

Touching upon the activity of OSCE Minsk Group co-chairs H. Hajiyev stressed that there are no tangible results in resolving the conflict and stressed the necessity of resolving the conflict on the basis of the territorial integrity of Azerbaijan, sovereignty, and inviolability of borders, as well as the return of Azerbaijani refugees and internally displaced persons to their native lands.

Touching upon the latest military provocation conducted by Armenia in the direction of Tovuz on Armenia-Azerbaijan border H. Hajiyev noted that Armenian Armed forces shelled Azerbaijan’s positions by using heavy artillery and as a result, Azerbaijani servicemen died, as well as they deliberately targeted the settlements of Azerbaijan and civilians.

Assistant to President noted that Armenia’s purpose of conducting this attack is to pose a threat to the East-West corridor and to oil and gas pipelines of Azerbaijan. Noting that Azerbaijan does not have a military purpose on border area H. Hajiyev noted that our country tries for resolving conflict within the territorial integrity of Azerbaijan and in accordance with UN Security Council resolutions.

Mentioning the activity of Metsamor Nuclear Power Plant (NPP), H.Hajiyev noted that the mentioned station is only NPP station which is using Chernobyl technology.

Noting that the NPP using outdated technologies is a threat to the region. H.Hajiyev especially emphasized that Metsamor became a tool for the smuggling of radioactive substances.

At the same time, appealing to Azerbaijanis living in Canada and Canadian law enforcement, he called on them to be vigilant because lobby groups of Armenia attacked Azerbaijanis in Los Angels, Paris, and Brussels and Armenian terror organizations may attack Azerbaijanis.