The situation in Nagorno-Karabakh to be one of the main topics of discussion at Lavrov-Zarif meeting - Russian MFA
Read: 168

Putin, Erdogan discuss progress of implementation of agreements on Karabakh 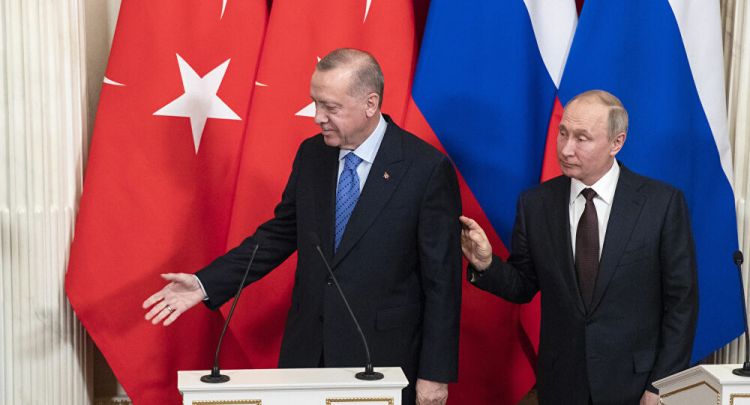 Russian President Vladimir Putin and his Turkish counterpart, Recep Tayyip Erdogan, discussed the implementation of the agreements on Nagorno-Karabakh by phone, the Kremlin said in a statement on Tuesday, Sputnik reports.

The phone conversation took place at the initiative of the Turkish side, the Kremlin said.

"The progress of the implementation of the agreements recorded in the Statement of the presidents of Russia, Azerbaijan and the prime minister of Armenia on Nagorno-Karabakh on 9 November was discussed in detail and in all aspects", the statement says.
The Turkish leader's administration said in a statement that the presidents discussed the creation of a centre to monitor the ceasefire in the region.
"Our president said during a conversation with Putin that, within the framework of steps taken to ensure a solution to the crisis in Karabakh and stability in the region, it is necessary that the joint monitoring centre, which will be created together with Russia, start working as soon as possible", the statement says.
Putin also briefed Erdogan about the activities of Russian peacekeepers who effectively support the ceasefire in Karabakh.
"Both sides noted the need for consistent and complete implementation of decisions aimed at ensuring stability and establishing a peaceful life in the region", the Kremlin said.

The Turkish leader added that it is "impossible to understand why other co-chairs of the OSCE Minsk Group criticise the peace efforts".

Pointing to Azerbaijan's sensitivity to the full return of its territory, Erdogan stressed that "in the process of implementing the agreement, the Armenian side should not hold back on its responsibilities".

The presidents of Russia and Turkey declared the priority of humanitarian problems in Nagorno-Karabakh, including the return of refugees, the preservation of religious and cultural sites.

The leaders also discussed the fight against COVID-19 and bilateral relations and trade on Tuesday.