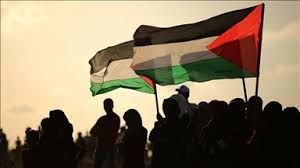 The Popular Front for the Liberation of Palestine said Saturday that reports about a decision on elections before any national dialogue is not true.
A statement by the group said the election decision did not constitute a guarantee for an end to internal Palestine division, Eurasia Diary reports citing Anadolu Agency.
It stressed that national interests require prioritization of national dialogue to address various political and organizational issues and rules of national partnership.
Palestinians are set to hold parliamentary, presidential and National Council polls under a decree signed Friday by Palestinian President Mahmoud Abbas.
Parliamentary elections will be held May 22, presidential elections July 31 and Palestinian National Council elections Aug. 31.
Palestinian groups Hamas and Fatah have been at odds since Hamas seized the Gaza Strip from its rival in 2007, but last September the two met in Turkey and agreed to hold parliamentary and presidential elections.
On Dec. 31, senior Hamas leader Ismail Haniyeh sent Abbas an official letter on ending the division and holding general elections in Palestinian territories.
The last presidential election was in 2005, while the parliamentary elections were last held in 2006.