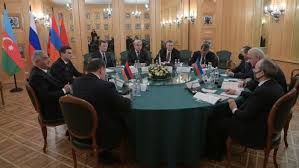 During their third meeting, the parties discussed the implementation of the agreements of the leaders of Russia, Azerbaijan, and Armenia, Vladimir Putin, Ilham Aliyev, and Nikol Pashinyan in the field of transport and economic relations.

"During the meeting, the sides considered the main directions of joint work arising from the implementation of paragraph 9 of the statement of the President of the Republic of Azerbaijan, the Prime Minister of the Republic of Armenia and the President of the Russian Federation of November 9, 2020, as well as paragraphs 2, 3, 4 of the statement of January 11, 2021," he said, "The parties reviewed the reports of expert subgroups on a rail, road and combined transport, as well as on transport security issues, including security, border, customs, sanitary, veterinary, phytosanitary and other types of control."

As Overchuk noted, the working group decided to finalize the draft report provided for by the leaders' statement of January 11, 2021, on the list and schedule of implementation of measures for the restoration and construction of new transport infrastructure facilities necessary for the organization, performance, and safety of international transport.