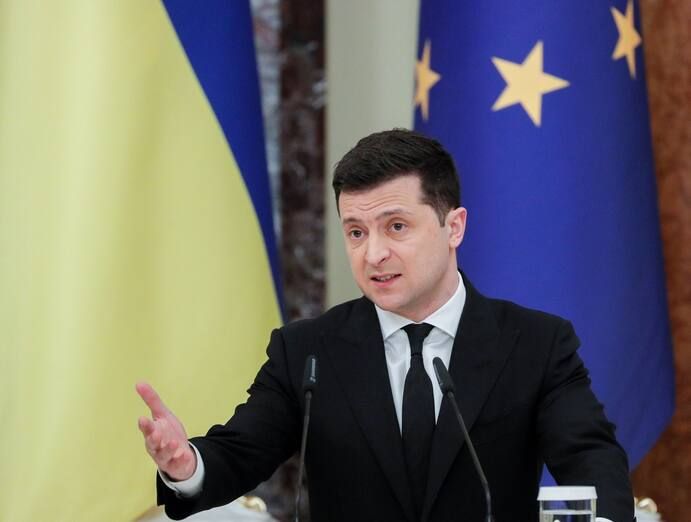 The word of the moment in Ukrainian politics is "de-oliharkhizatsia" or de-oligarchization: a renewal of the long-held goal — and sometimes only faint hope — to free the country's political system of domination by the ultrarich.
Whether President Volodymyr Zelensky can deliver may set the tone for relations with the Biden administration. Ukraine’s gambit has added urgency as it tries to reset its standing in Washington after being center stage in the GOP’s unsuccessful dirt-digging efforts against then-candidate Joe Biden and his son Hunter.
Biden has made it clear he wants the Ukrainians to undertake root-and-branch political and economic reforms — a drive dating back to the Obama administration when Biden, as vice president, was the point man for Ukraine.
“The threat from within [Ukraine] is corruption . . . a lack of institutions that can effectively manage the country,” said Antony Blinken, now secretary of state, during his confirmation hearing in January. “If that threat continues, [it’s] going to be very difficult for them to build a viable democracy.”
But Zelensky, a 43-year-old former comedian, has made only limited headway against the oligarchs’ grip since his election two years ago.
Washington has provided Zelensky with some new ammunition. U.S. sanctions were imposed in early March against commodities and media mogul Ihor Kolomoisky, one of the biggest fish in the Ukrainians’ oligarch pond, for “significant corruption” while he served as governor in a southeastern Ukrainian region seven years ago.
The oligarchs’ power in Ukraine reaches deep into areas such energy, mining and media — giving a clique of billionaires the clout to shape political and policy decisions. Ukraine is on notice that greater Western aid and international loans are contingent on trimming back their influence.
A $5 billion loan deal from the International Monetary Fund is on hold as the Ukrainians try to convince IMF officials that they are serious about tackling corruption.
The success of an anti-oligarch campaign could also determine Zelensky’s political future in a possible reelection bid in 2024.
Ukrainian authorities have at least raised their rhetoric, saying the “oligarch era” is coming to an end. On Feb. 19, they froze the assets of Viktor Medvedchuk, a multimillionaire and friend of Russian President Vladimir Putin. Medvedchuk has been on a U.S. sanctions list since March 2014.
Former Ukraine prosecutor says Hunter Biden ‘did not violate anything’
Earlier this month, Zelensky posed a question to the oligarchs in a video address: “Are you ready to work legally and transparently, or do you want to continue to create monopolies, control the media, influence deputies and other civil servants?”
Zelensky delivered his statements shortly after U.S. State Department officials sanctioned Kolomoisky, a critical supporter of Zelensky’s entry into politics.
The sanctions prevent Kolomoisky and members of his family from traveling to the United States, where the Ukrainian tycoon is under investigation for allegedly laundering money through American real estate holdings.
Dealing with Kolomoisky could also prove to be the most important test case for Zelensky — who as a comedian appeared on Kolomoisky’s television network — to prove his anti-oligarch bona fides.
In December 2016, officials under the previous Ukrainian president, Petro Poroshenko, nationalized Kolomoisky’s PrivatBank after Kolomoisky and his partners were accused of embezzling billions of dollars. Kolomoisky is battling in Ukrainian courts to have the bank ownership restored or be compensated for losses.
The U.S. sanctions against Kolomoisky were a “signal to the Ukrainian government that it’s time to act against the oligarchs,” said Oleksandr Danyliuk, a former Ukrainian finance minister who helped nationalize PrivatBank.
“What is also important is why the sanctions were imposed: for corruption and weakening democratic institutions,” he added. “That pretty much describes the influence that the oligarchs have had on Ukraine for so many years.”
But more than two months into the new administration, Biden and Zelensky still have not spoken directly. This is a matter of growing unease for Ukrainian officials, who are looking for increased U.S. engagement in several areas — chief among these being Ukraine’s seven-year war against Kremlin-backed insurgents in the country’s east.
“You have a feeling that everything is fine, and then you hit the ceiling,” said one senior Ukrainian official, who spoke on the condition of anonymity to discuss sensitive diplomacy. “And this ceiling is the direct contact between the presidents.”
As part of the Medvedchuk sanctions, Ukraine also blocked the transmission of three television stations that officials say disseminate Russian propaganda and are under his control. Medvedchuk denies the stations are his.
Putin is godfather to one of Medvedchuk’s daughters, and Medvedchuk is leader of Ukraine’s biggest opposition party, the Opposition Platform/For Life, which calls for closer ties with Russia. Medvedchuk denies the party is “pro-Russian.”
“This is all the result of my party’s opposition work and that I’m an opponent of Zelensky,” he said. “Therefore, they’ve begun a dirty fight against me, my party and members of my family.”
But Ukraine’s prosecutor general, Iryna Venediktova, who would be one of the key figures in an anti-oligarch crusade, has signaled that more blows against oligarchs could come.
“The oligarchs are a thing that strangles the country,” she said. “As long as they exist, we cannot thrive.”