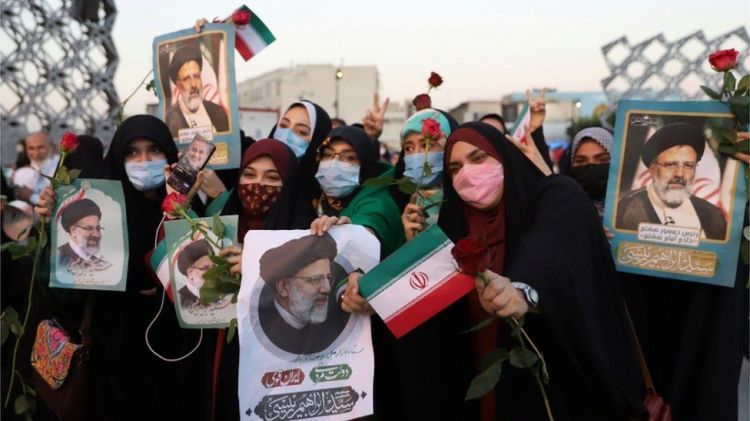 Israel has said the international community should have grave concerns about the election of Iran's new president-elect, Ebrahim Raisi.
A spokesman for Israel's foreign ministry, Lior Haiat, said Mr Raisi is Iran's most extremist president yet.
He also warned the new leader will increase Iran's nuclear activities.
Ebrahim Raisi was declared the winner of Iran's presidential election on Saturday, in a race that was widely seen as being designed to favour him.
Mr Raisi, who will be inaugurated in August, is Iran's top judge and holds ultra-conservative views. He is under US sanctions and has been linked to past executions of political prisoners.
In a statement following his victory, he promised to strengthen public trust in the government, and be a leader for the entire nation.
"I will form a hard-working, revolutionary and anti-corruption government," state media quoted him as saying.
However in a critical Twitter thread, Israel's Lior Haiat said he is "an extremist figure, committed to Iran's rapidly advancing military nuclear program".
Iran and Israel have been in a long-running "shadow war", which has resulted in both countries taking part in tit-for-tat actions, but so far avoiding all-out conflict. Recently, however, the hostilities between the two have escalated again.
The situation is complex, but one big source of tension is Iran's nuclear activities.
Iran blames Israel for the murder of its top nuclear scientist last year and an attack on one of its uranium enrichment plants in April.
Meanwhile, Israel does not believe that Iran's nuclear programme is purely peaceful, and is convinced it is working towards building a nuclear weapon.
The 2015 Iran nuclear deal, which saw harsh penalties lifted on Iran as long as it stopped some nuclear work, collapsed when former US President Donald Trump abandoned the deal in 2018, and re-imposed the crippling economic sanctions. The Biden administration is now trying to work out a way to re-enter the deal.
In response to the sanctions being tightened, Iran stepped up its nuclear activities, and is currently enriching uranium at its highest levels ever - although still short of what is needed to make nuclear-grade weapons.
Commenting on the election result, the US said it regretted Iranians were "denied their right to choose their own leaders in a free and fair electoral process".
Voter turnout was at a record low for this election, with less than 50% of registered voters going to the polls, compared to more than 70% in 2017. Many people shunned the election, believing that it had been engineered in favour of Mr Raisi, who is a staunch ally of Supreme Leader Ayatollah Ali Khamenei.

1/4 After the Supreme Leader effectively dictated to the Iranian public who they could choose, less than 50% of Iranian citizens eligible to vote have elected its most extremist president to date. pic.twitter.com/gYuBdUNMqx