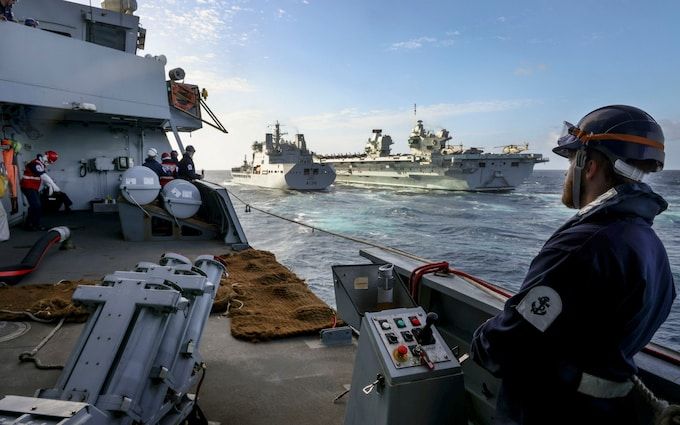 Britain's aircraft carrier entered the South China Sea on Tuesday night, as defence sources said Beijing will be watching from the air and beneath the water.
The Carrier Strike Group entered the disputed waters on Tuesday.  It is thought that HMS Queen Elizabeth will not be sailing through the contested Taiwan Strait on its operational maiden voyage while in the area, although its returning route has not yet been confirmed.
One defence source said it was anticipated China would watch the group's movements from the air, as well as under the water.
When The Telegraph was granted access to HMS Queen Elizabeth in Cyprus recently, there was a heavy amount of surveillance of the aircraft carrier by Russia, which included in the sky, below the water and on the surface. At the time it was described by those on board as a game of “cat and mouse”.
The warship went on to transit through the Black Sea, where it had more dealings with Russia.
However, the source also cautioned that they expected its passage through the South China Sea would be smoother than when Russia reacted to HMS Defender, a British Type-45 Destroyer, as she passed through the Black Sea in June.
Last month Russia said that one of its warships in the area near Crimea fired warning shots and a warplane dropped bombs to force a British destroyer out of the stretch of water, which Russia claims as its own.
Moscow's defence ministry said that it had fired "warning shots" at the UK warship before a Su-24M warplane dropped four bombs close to the vessel.
However, responding to Moscow's claims at the time, Downing Street dismissed the suggestion that the Royal Navy was "fired upon or that the ship was in Russian waters" as "incorrect".
Placeholder image for youtube video: wkaOZA36xm8
Meanwhile the US defence secretary said on Tuesday that Britain might be more helpful as an ally if it did not focus on Asia.
Lloyd Austin told a press conference in Singapore: “We have interests around the globe and we want to make sure that we work together to address all those interests.”
He added: “[Military] resources are scarce . . . As we look to balance our efforts in various parts of the world, we are not only looking to help each other in the Indo-Pacific but we are looking to ensure that we help each other in other parts of the world as well.”
“We [could] focus a bit more here, and […] the UK can be more helpful in other parts of the world.”
An MoD spokesperson said: “The Carrier Strike Group is lawfully navigating the South China Sea, just as one third of global shipping does on an annual basis. It is taking the most direct route through international waters to conduct exercises with allies and partners in the Philippine Sea.
“As the Defence Secretary said to UK Parliament back in April, we are not going to go to the other side of the world to be provocative. We will be confident, but not confrontational.”