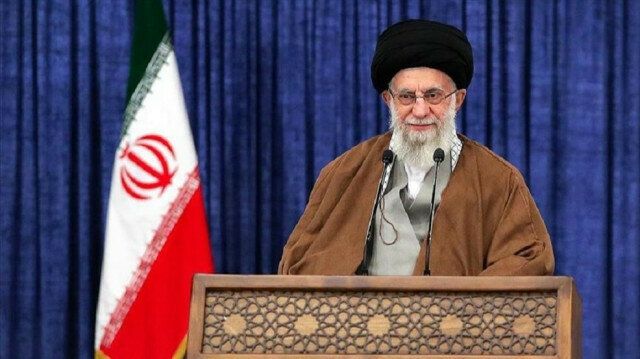 In his farewell meeting with outgoing President Hassan Rouhani and members of his cabinet, Iran's Supreme Leader Ali Khamenei said experience of the past eight years shows trust in the West is not helpful.
Rouhani's reformist government ends its two terms in office next week, with former judiciary chief Ebrahim Raeisi set to form the new conservative government on Aug. 5.
Khamenei told Rouhani and his cabinet that the most important experience from his government is "distrusting the West", urging the incoming administration to "use the experience".
"They don’t help but they strike a blow wherever they can," he said. "When they don't, it is because they cannot".
Khamenei, who has opposed negotiations with the West, said the outgoing administration "failed whenever it relied on the West", calling on the new administration to untie domestic programs from the West.
"It definitely fails, it definitely gets hit," he said. "Wherever you left your work to the West, you failed, and wherever you rose and moved without trusting the West, you succeeded."
Calling for reliance on domestic capabilities, Khamenei said there are "thousand different ways" beyond reliance on the West.
The Iranian leader's remarks are significant as it comes amidst a standoff over the 2015 nuclear deal after six rounds of marathon talks in Vienna to revive it failed to produce a breakthrough.
Khamenei had opposed the nuclear deal signed by Iran and the US in 2015, which the Trump administration abandoned in May 2018. Since then, he has often warned against trusting Washington.
His latest remarks are also a sign of what position the Raesi government is likely to take on the nuclear deal and negotiations, as he is considered a Khamenei loyalist.