We will conduct discussions with heads of Iranian and Turkish investigation centers - Shafiyev | Eurasia Diary - ednews.net

Turkey is of importance for ensuring security, safety and peace in Afghanistan - Expert
Read: 183 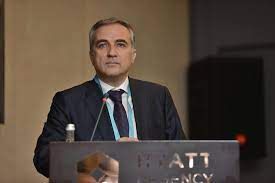 "Iranian and Turkish investigation centers have arrived in Azerbaijan with our invitation," Farid Shafiyev, Chairman of the Board of the Center for Analysis of International Relations told journalists, APA reports.

He noted that discussions in triple format have long been planned: "It has not been implemented due to pandemic. Certain tensions between Iran and Azerbaijan are observed. But discussions in triple format have been planned before it. I think that platform of investigation centers is an advisable place for discussion of problematic issues. The purpose is discussion of the geopolitical situation, new condition in the region after the second Karabakh War. It includes transport projects and others.