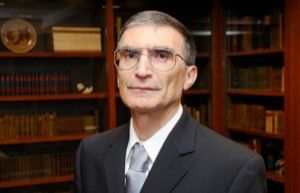 'The victory of Azerbaijan in the 44-day war marked a great victory for the entire Turkic world. All the Turks of the world are indebted to the fallen Azerbaijani soldiers and their families.' This was stated by the Nobel Prize laureate, Professor Aziz Sancar, who spoke at the UNEC Economic Forum in Baku, Azeri Daily reports.

The Nobel laureate defined a new task facing the Turkic world -- to win in the field of science. Sancar proposed 5 main principles for a breakthrough in the development of science. The first is a wide exchange of experience and close cooperation between scientific institutions. Such cooperation has already been established between Baku and Ankara, and Uzbekistan is moving in this direction.

At this time, a Turkic University is being created in Tashkent, where students representing Turkic peoples will study. It is necessary for the scientific sphere to become a single space of interaction from Turkey to the Turkic autonomy in the PRC. In one of his last statements, President Recep Tayyip Erdogan said that he would do his best to promote the integration of the Turkic states and peoples, including the sphere of science. The second is to instill in children a love of scientific disciplines from an early age. Let at the most simple, uncomplicated level, but children should have an idea of ​​science. The third is to give freedom of activity to young scientific personnel, the fourth is that people engaged in science should be outside of religion and politics, and the fifth is to create equal conditions and opportunities in the scientific field for men and women.

According to Sancar, the Turkic world has a huge scientific potential. In the 1980s, Turkey and the PRC had the same starting conditions for the development of science. Now the Chinese advanced science, discoveries and developments have pushed aside the academic institutions of Europe and America. In the next five years, in at least 10-15 scientific areas, the Chinese from China and the United States will be awarded the Nobel Prize. The Turkic peoples need to draw conclusions and make a scientific breakthrough, Sancar is convinced.