Russia blocks off 70 per cent of Sea of Azov around annexed peninsula - ednews.net 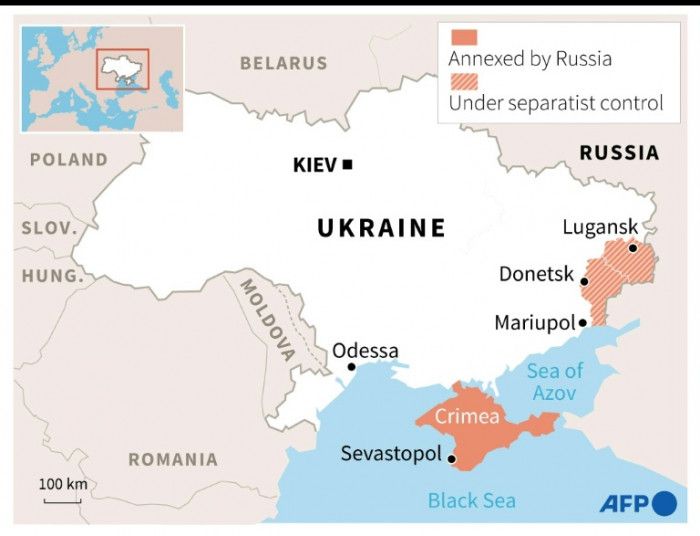 Russia has blocked off almost 70 per cent of the Sea of Azov around the annexed Crimean Peninsula, according to a statement from the Ukrainian Navy on Friday.

The Russian fleet is apparently planning firing exercises off the Ukrainian ports of Mariupol, Berdyansk and Henichesk, the naval forces announced.

There was no confirmation yet from the Russian side.

On Thursday, the Russian border guard accused a Ukrainian naval ship of approaching the Kerch Strait without permission. The Russian government spoke of a dangerous provocation, while Kiev rejected the accusation, claiming that the "Donbas" ship had not left its own territorial waters.

The Sea of Azov is an internal sea with Russia to the east and Ukraine to the west. It is connected to the larger Black Sea by the Kerch Strait.

In November 2018, three Ukrainian military vessels were hijacked by the Russian border guard while trying to cross the strait. The 24 sailors were released only after months of negotiations.

Ukraine has been at war with Russia since its neighbour first annexed Crimea in 2014 and began supporting pro-Russian separatists in Ukraine's eastern region of Donbas.

Tensions have skyrocketed in recent weeks, amid fears from Ukraine and its Western allies that Moscow may be planning another incursion.

According to NATO, Russia has gathered between 75,000 and 100,000 soldiers on its border with Ukraine.

The European Union wants to stave off any possible invasion with the help of a concrete sanctions package, European Commission President Ursula von der Leyen said on Friday.

"Aggression must have a price tag," von der Leyen said on the sidelines of a meeting in Brussels with Olaf Scholz, the new chancellor of Germany. "Therefore, we will communicate these points in advance in an appropriate form ... to Russia."

Von der Leyen said further details would not be made public.

She left open whether a ban on the operation of the Nord Stream 2 pipeline, which is to deliver natural gas from Russia to Germany via the Baltic Sea, could be part of the sanctions package.

"In general, it is important that energy should never be used as a means of exerting pressure and that the energy security of Europe and its neighbours must be guaranteed," the top EU official said.

Scholz said, "It's very clear that Germany, the European Union and many other countries would react if border violations occurred."

But he said it was equally clear in this situation that the task must be to prevent exactly that. "We want security and cooperation in Europe. We want borders to remain inviolable and inviolable. And that is what is currently at stake," the German leader added.

Scholz also met on Friday with NATO Secretary General Jens Stoltenberg, who rejected Moscow's demand that NATO abandon a 2008 commitment for Kiev's membership of the alliance.

"NATO's relationship with Ukraine is going to be decided by the 30 NATO allies and Ukraine, no one else," Stoltenberg said.

"We cannot accept that Russia is trying to re-establish a system where big powers like Russia [have] spheres of influence, where they can control or decide what other members can do."