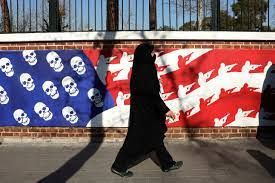 The nearly two-decade-old U.S. military mission in Iraq has entered a dangerous new phase, with critics warning the Biden administration has allowed the mission to carry on without clear parameters or a straightforward end game amid increased attacks by volatile Iranian proxies.
President Biden, who oversaw last year’s disastrously executed military pullout from Afghanistan, declared months ago that the U.S. combat role in Iraq would be over by the end of 2021.
While American forces formally transitioned in December from a combat mission against Islamic State remnants to advising the Iraqi military, analysts say the roughly 2,500 U.S. troops still in Iraq face growing threats, specifically from Iran-backed militias in the country.
The predominantly Shiite Muslim militias — several of which are backed directly by the Iranian military — have grown increasingly unpredictable and erratic during recent months, while their political backers in Baghdad struggled to maintain power and influence within the Iraqi government.
The first two weeks of 2022 saw the militias launch at least four attacks on U.S. military or diplomatic installations, including a rocket attack Thursday that targeted the U.S. embassy in Baghdad.