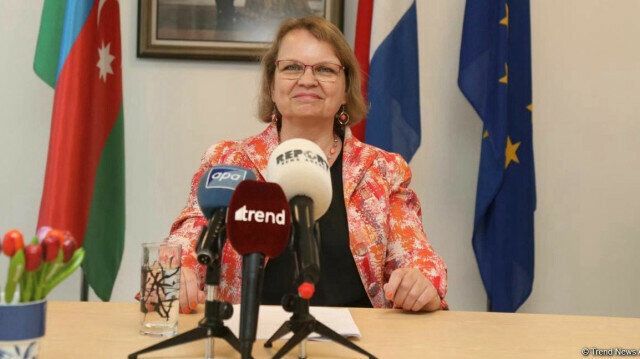 'One company from the Netherlands has already worked together with the Azerbaijan National Agency for Mine Action on this,' Eizema said

According to Yeni Safak, Dutch companies can contribute to the de-mining process in Azerbaijan’s Karabakh, which was liberated from Armenian occupation in 2020, Ambassador of the Netherlands to Azerbaijan Pauline Eizema told reporters during a press conference at the embassy on Wednesday in Baku, Trend News Agency reported.

"One company from the Netherlands has already worked together with the Azerbaijan National Agency for Mine Action on this," Eizema said.

The Netherlands can also propose other specialized companies to speed up the de-mining process, she added.

Relations between the former Soviet republics have been tense since 1991, when the Armenian military occupied Nagorno-Karabakh, also known as Upper Karabakh, a territory internationally recognized as part of Azerbaijan, and seven adjacent regions.

New clashes erupted on Sept. 27, 2020, and during the six-week war, Azerbaijan retook several cities and 300 settlements and villages.

The conflict ended in November 2020 in a Russia-brokered deal that saw Armenia cede chunks of the territory it had occupied for decades.

In January 2021, the leaders of the three countries agreed to develop economic ties and infrastructure for the benefit of the entire Caucasus region.