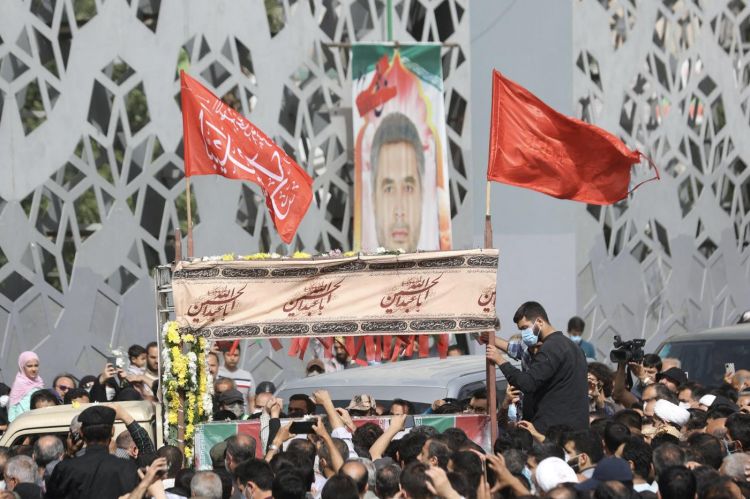 Israel remains vehemently opposed to the revival of the JCPOA nuclear talks. By angering Iran and keeping tensions in the region high, it hopes to sabotage negotiations
The IRGC identified Khodai only as a "defender of the shrine" - attributed to those who went to Syria and fought Islamic State (IS) combatants who were threatening sacred Shia shrines.
Sabreen News, which is close to the IRGC, described Khodai as a member of the Guard's elite Quds force, the overseas arm of the IRGC.
Iran: Revolutionary Guard colonel 'assassinated' in Tehran, says state TV
Read More »
A spokesperson for Iran’s armed forces, General Abolfazl Shekarchi, accused the US and Israel of being behind the assassination, calling them the “centre for planning and policy-making for terrorist acts in the world”.
Iranian President Ibrahim Raisi lamented the death of Khodai, blaming the "hands of global arrogance" for his killing and vowed revenge.
"I insist on the serious pursuit (of the killers) by security officials, and I have no doubt that the blood of this great martyr will be avenged," Raisi said.
Abdullah Ganji, the former chief editor of Javan, the IRGC newspaper, tweeted that “the kind of mission this martyr had in Syria points the finger of assassination at the Zionists”, perhaps alluding to reports that Khodai had had a major role in transferring Iranian weapons to Syria.
The Israeli air force has repeatedly attacked Iranian positions in Syria and convoys en route to Lebanon.
Meanwhile, some observers in Iran believe that this assassination was in response to the revival of the Joint Comprehensive Plan of Action (JCPOA), the 2015 deal that put limitations on Iran’s nuclear programme in return for sanctions relief. In 2018, then President Donald Trump unilaterally withdrew the US from the deal.
In the past year, Iran and the US have been engaged in indirect talks to revive the JCPOA. The deal is almost done but Tehran and Washington are deadlocked over the issue of the IRGC’s name being on the US Foreign Terrorist Organisations (FTO) list.
To break the impasse, the European Union suggested a “middle way”, whereby the IRGC would be taken off the list and its Quds force added instead.
In this vein, Enrique Mora, the EU's chief nuclear negotiator, travelled to Iran two weeks ago. The EU later described the talks with Iran as “positive enough” to reopen the stalled nuclear negotiations after two months of deadlock.