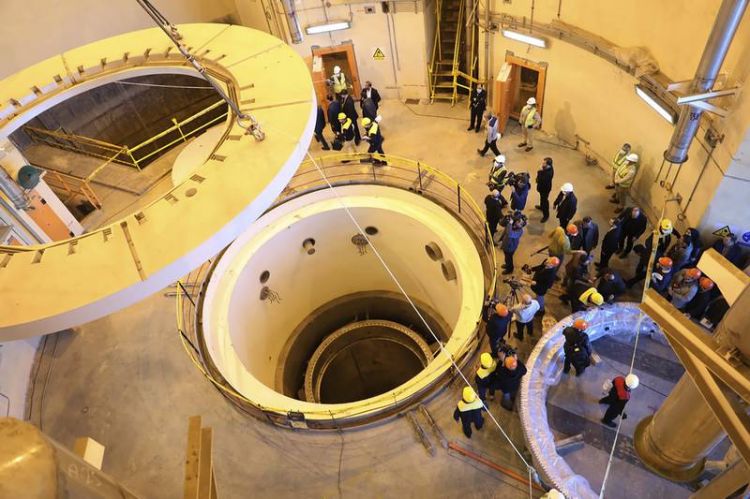 Iran sent its response to the EU's "final" draft text to save the 2015 nuclear deal late on Monday, an official from the bloc said, as Tehran called on the US to show flexibility to resolve three remaining issues.
The current draft of the deal has taken 16 months of indirect US-Iranian talks, with the EU mediating between the parties.
A senior EU official said on August 8 that it had laid down a "final" offer and expected a response within a "very, very few weeks."
The US has said it is ready to quickly seal a deal to restore the 2015 accord on the basis of the EU proposals, but Iranian negotiators said Tehran's "additional views and considerations" to the text would be conveyed later.
The EU official on Monday provided no details on Iran's response.
The US State Department said on Monday that the Biden administration would share its views on any Iran response “privately” with the EU.
“We will share our views on the text proposed by the High Representative [Josep Borrell] directly with him," department spokesman Ned Price said.
"We will do that privately. We do agree, however, with his fundamental point, and that is that what could be negotiated has been negotiated.”
The 2015 Iran nuclear deal with world powers could be revived “if Tehran's red lines are respected”, Iranian Foreign Ministry spokesman Nasser Kanaani said earlier on Monday.
Foreign Minister Hossein Amirabdollahian said Iran had a “Plan B” if no agreement could be reached, Fars news agency reported.
"Specifically, there are three issues … if these three issues are resolved, we can reach an agreement," Mr Amirabdollahian said.
"But failure to revive the pact would not be end of the world."
He did not outline the three issues.
But analysts say sticking points include: an investigation by the UN's International Atomic Energy Agency into traces of uranium at sites Iran said were free of nuclear research; the risk of a future US administration walking away from a deal; and sanctions on the Islamic Revolutionary Guard Corps, or IRGC.
Mr Kanaani said the removal of sanctions on Iran, if an agreement could be reached, would help the global economy and energy supplies.
Lifting sanctions would boost Iranian oil exports at a time when the world market has been disrupted by Russia's invasion of Ukraine.
“Iran can provide more supplies than in the past,” Mr Kanaani said.
Mr Price said that if Iran did not accept a mutual return to the full implementation of the nuclear deal, the US was “equally prepared to continue the vigorous enforcement of our sanctions and the imposition of other diplomatic pressure".
But he urged Iran to drop “extraneous demands” that go beyond the scope of the nuclear deal.
Mr Price reaffirmed the US rejection to delist the IRGC as foreign terrorist organisation, and to remove other sanctions on the corps are beyond the scope of the nuclear deal.
“If Iran wants the sanctions lifted, they will need to alter their underlying conduct, they will need to change the dangerous activities that gave rise to the sanctions in the first place,” he said.
“We do not plan to relax enforcement of the sanctions. We have not offered to do so in the context of the JCPOA [nuclear deal] talks.
Iran said on Friday that an attempt by the EU to revive the deal could be “acceptable, if it provides assurances” on crucial demands made by Tehran, state news agency Irna reported.
A senior EU official said no more changes could be made to the text.
Under the 2015 Joint Comprehensive Plan of Action, Iran agreed to curbs on its nuclear programme in exchange for economic sanctions being lifted.
In 2018, Donald Trump, US president at the time, withdrew his country from the deal, claiming it threatened American security.
The US reimposed tough sanctions on Iran and in response Tehran stopped adhering to limits on its nuclear programme.
Washington and other powers fear Iran is trying to create nuclear weapons. Tehran says its programme is for civilian use.