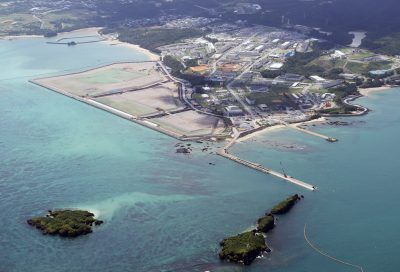 As a ‘cold peace’ settles between Japan and China, both countries are working towards a pragmatic, if not awkward, coexistence. Okinawa will continue to play a pivotal role in enhancing Japanese and US deterrence capabilities vis-a-vis China following Governor of Okinawa Prefecture Denny Tamaki’s re-election on 11 September 2022.

Okinawa’s role in Japanese security was reinforced by China’s military drills in the Taiwan Strait following US Speaker of the House Nancy Pelosi’s visit to Taiwan. Chinese missiles were fired into Japan’s exclusive economic zone southwest of Hateruma Island in Okinawa Prefecture.
The re-elected Governor Tamaki is unwavering in his stance that increased deterrence capabilities based in Okinawa may enhance instability in and around Okinawa. He also remains opposed to the relocation of the US Marine Corps’ base from densely populated Futenma to Okinawa’s Henoko coastal region.
Citizens on nearby Ishigaki Island have stressed the importance of maintaining deterrence capabilities on Okinawa as cross-Strait tensions rise. Senior Liberal Democratic Party politicians such as Minister of Digital Affairs Taro Kono emphasise that the drills ‘clearly show that if anything happened with Taiwan we will be affected’.
At the national level, a recent meeting on 17 August 2022 between the Director-General of Japan’s National Security Secretariat Takeo Akiba and the Director of China’s Office of Foreign Affairs Yang Jiechi showed that the momentum for dialogue is waning. The foreign ministers of the two nations had already cancelled a meeting shortly before this due to growing tensions over Taiwan. Director-General Akiba expressed Japan’s concerns about China’s strengthening of military activities around Taiwan.
Echoing Director-General Akiba’s comments, the 2022 Defence of Japan Report released by the Ministry of Defence raises concerns about China’s lack of ‘hesitation to unify Taiwan by force’ and argues that deterrence is critical to defend Japan and ensure peace. The presence of US forces based in Okinawa, alongside further investments in the capabilities of the Japan Self-Defence Forces, will be crucial to maintaining deterrence.
Following the 2022 Okinawa gubernatorial election, the issue of the base’s relocation will continue to drive a wedge between Okinawans and Tokyo. There will be accusations that the democratic voices of the Okinawan people are being ignored for the sake of national security.
The challenge for Okinawa is that the Japan Ministry of Defence’s 2022 budget sets aside 18.5 billion yen (US$128.8 million) for relocating US Marine Corps stationed in Okinawa to Guam. The budget also allocates 188.6 billion yen (US$1.3 billion) for the realignment of US military bases in Okinawa, which includes the relocation of Futenma Air Base and the return of land areas south of Kadena Air Base.
The defence procurement does not include the relocation of Japanese missile plans on Ishigaki Island designed to help boost domestic and Taiwanese defence. There is also no plan to halt initiatives to build military bases on outlying islands.
Any clawback against these initiatives could embolden China’s assertive behaviour towards Taiwan and the Senkaku Islands or raise concerns from Taipei about the United States and Japan’s commitment to defending Taiwan. North Korea could also seek an advantage from a decreased US presence in Okinawa.
Tokyo’s concerns centre on the sea lines of communication that connect the East China Sea through the Taiwan Strait to the South China Sea. These are the critical arteries through which energy resources, imports and exports flow to and from the Japanese economy. Taiwan’s dominant role in semiconductor chip production is also key to Tokyo’s security calculus. Any disruption to semiconductor supply chains would hobble Japan’s automobile and electronic industries, imparting serious economic damage.
Okinawa is part of that security equation because it is home to US bases and Japan Self-Defence Force infrastructure. A succession of prominent Liberal Democratic Party politicians, including late prime minister Shinzo Abe and former deputy prime minister Taro Aso, have made strong statements linking Japan’s security to the security of Taiwan. They have also expressed their unwillingness to reduce Japanese and US Okinawa-based deterrence capabilities.
That means Okinawa will remain a key military hub. Maritime, air and space domain awareness, air and missile defence, cooperation within the US–Japan alliance, and strategic partnerships and reciprocal access agreements like those signed with Australia and the United Kingdom will further strengthen Japan’s ability to deter unwanted military activity. These measures are meant to build multi-layered multinational deterrence capabilities to push back against China’s assertive behaviour within the region.
Japan should remain consistent in its diplomatic engagement with China and build resilience in its economic relationship. For Okinawa, this means continuing its complex coexistence with US bases — a situation that Okinawans see as an uneven shouldering of Japan’s security burden. It is also an opportunity for Okinawa to maximise the benefits of its Hobbesian predicament by extracting more aid from Tokyo to enhance the prefecture’s economy, education system and infrastructure.