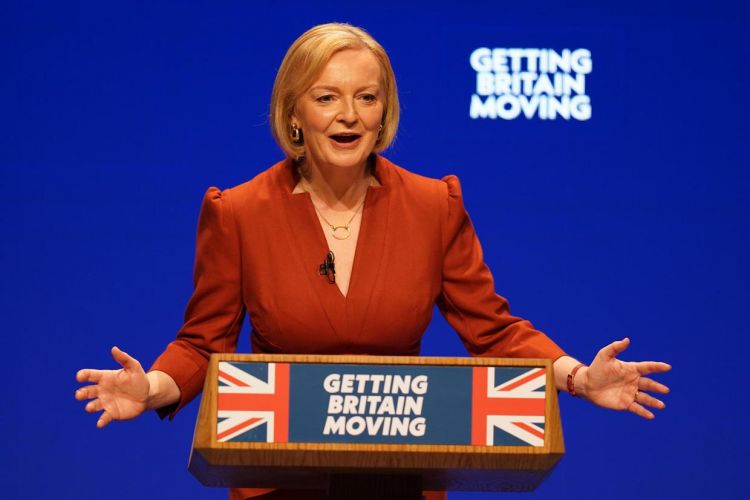 Prime Minister Liz Truss has said she will face down “the separatists who threaten to pull apart our precious union” in her maiden speech to the Conservative Party conference.
However, there was no direct mention of Northern Ireland as she vowed to consign EU regulations to history.
Ms Truss focused on her ambitious plans to grow the UK economy and spread prosperity to all four regions of the UK on Wednesday.
It involves ditching all EU red tape to free up businesses, but she failed to say how Northern Ireland would benefit.
"This is the UK at its best, working together and getting our economy growing and we will face down the separatists who threaten to pull apart our precious union, our family," she said.
The Prime Minister took aim at opposition parties accusing them of lacking a plan and vision for Britain in a tirade against the "anti-growth coalition".
"Keir Starmer wants to put extra taxes on the companies we need to invest in our energy security and his sticking plaster solution will only last six months,” Ms Truss said.
"He has no long-term plan and no vision for Britain.”
Welsh First Minister Mark Drakeford was singled out for criticism for cancelling road-building projects and refusing to build the M4 relief road.
Scottish First Minister Nicola Sturgeon was also attacked for failing to build new nuclear power stations to help solve the energy crisis.
"Have these people ever seen tax rises they don't like or an industry they don't want to control?” Ms Truss asked.
"They don't understand British people, they don't understand aspiration.
"They are prepared to leave our towns and cities facing decline."
However, she failed to address issues directly facing Northern Ireland.