Armed attack on the Azerbaijan Embassy in Tehran - "Yasin Huseynzadeh, is likely to be working for SEPAH" - EXCLUSIVE
Read: 447 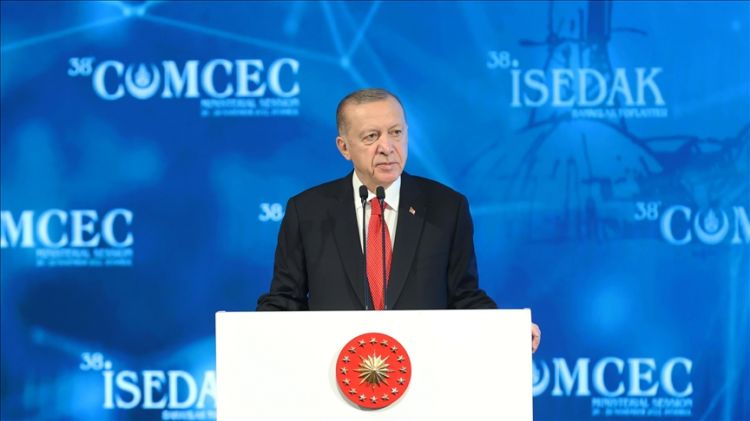 "We are determined to root out this terrorist organization, which poses a threat to the territorial integrity of Syria and Iraq, as well as our country," Erdogan told the 38th Ministerial Session of the Standing Committee for Economic and Commercial Cooperation (COMCEC) of the Organization of Islamic Cooperation (OIC) in Istanbul.

Erdogan said that although the names, claims, and geographies of terror groups are different, they target Muslims, and asked for strong support from COMCEC in Türkiye's struggle against "the enemies of Islam and humanity."

"The previous week, eight of our citizens, three of whom were children, were killed by the PKK in Istiklal Street and then in our Karkamis district."

"Of course, in this bloodshed, ... those who provide these terrorists with weapons and support (them) under the pretext of fighting against Daesh have a share," as much as the separatist terrorist organization, Erdogan said.

Despite all warnings of Türkiye, Erdogan added, "the blood of every innocent who died has been smeared on the hands and faces of those who try to legitimize terrorist organizations with letter games."

He said the game of supporting the PKK and its affiliates under the guise of fighting Daesh/ISIS, "which has been known to be a project product from the very first day," must come to an end.

Türkiye, which fought with Daesh on the field and defeated this organization, has no stomach for such arguments, the president stressed.

Recently, Türkiye launched Operation Claw-Sword in northern Iraq and Syria, a cross-border aerial campaign against the terror group PKK/YPG, which has illegal hideouts across the Iraqi and Syrian borders where they plan and sometimes execute attacks on Turkish soil.

After the air operation was launched on Nov. 20, Erdogan had also signaled a ground operation into northern Iraq and northern Syria to eliminate the terror threat.

In its more than 35-year terror campaign against Türkiye, the PKK – listed as a terrorist organization by Türkiye, the US, and EU – has been responsible for the deaths of more than 40,000 people, including women, children, and infants. The YPG is the terror group’s Syrian offshoot.

Erdogan also recalled that Türkiye is fulfilling its duty by hosting over 3.5 million Syrian refugees on its lands and supporting millions of them within the borders of Syria.

"In order for Syria to get rid of the spiral of conflict, humanitarian crisis, and terrorism, Islamic countries must show a stronger will and actively support the efforts for a political solution," he added.