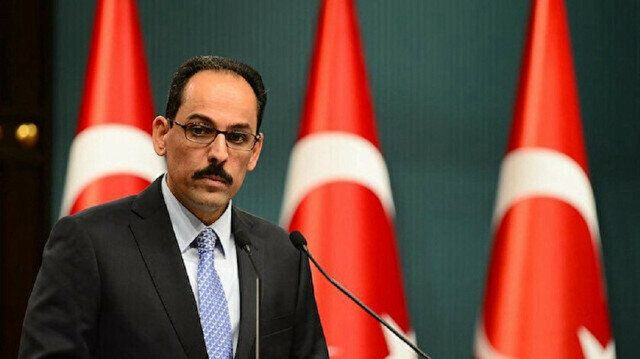 Kalin and Jake Sullivan exchanged views on bilateral political and economic matters, defense industry cooperation, Russia's war on Ukraine, developments in the Eastern Mediterranean, Sweden and Finland's NATO accession bids and other regional issues, according to a statement by the Turkish presidency.

Kalin expressed satisfaction over the meeting held at leaders-level on the sidelines of last month's G-20 Bali Summit.

The two officials also agreed to continue dialogue and consultations regarding global and regional matters.

On Sweden and Finland's NATO bids, Kalin welcomed the progress made by the two Nordic countries as he stated that all commitments in the tripartite agreement should be fulfilled.

Kalin further said that Türkiye and the US should focus on strategic and common interests as two NATO allies.

He also conveyed Türkiye’s expectations regarding the “unconditional completion of the approval process of the F-16 procurement and modernization request by the US Congress,” the statement said.

On the Ukraine war, the Turkish official stressed the need for returning to the negotiation table. He reaffirmed Türkiye’s determined diplomatic initiatives, including prisoner swap and grain deal, that could pave the way for a cease-fire.

He underlined that Türkiye targets PKK/PYD/YPG terrorist groups, which poses threat to the country's national security, in its operation in Syria and Iraq.

He reiterated that Türkiye has the right to self-defense in accordance with Article 51 of the UN Convention.

Last month, Türkiye launched Operation Claw-Sword in northern Iraq and Syria, a cross-border aerial campaign against the terror group PKK/YPG, which has illegal hideouts across the Iraqi and Syrian borders where they plan and sometimes execute attacks on Turkish soil.

After the air operation was launched on Nov. 20, Turkish President Recep Tayyip Erdogan also signaled a ground operation in northern Iraq and northern Syria to eliminate the terror threat.

In its more than 35-year terror campaign against Türkiye, the PKK – listed as a terrorist organization by Türkiye, the US, and EU – has been responsible for the deaths of more than 40,000 people, including women, children, and infants. The YPG is the terrorist PKK’s Syrian branch.