Energy flow in the nano range 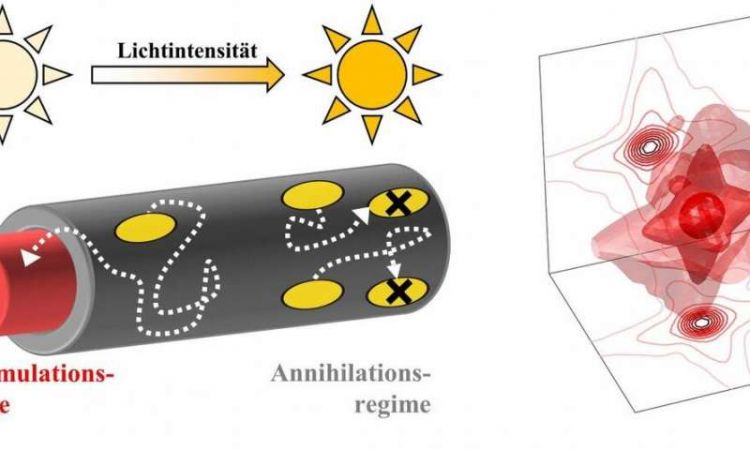 Plants and bacteria can capture the energy of sunlight with light-harvesting antennas and transfer it to a reaction center. Transporting energy efficiently and in a targeted fashion in a minimum of space is also of interest to engineers. If they were to master as well as microorganisms, they could significantly improve photovoltaics and optoelectronics.

But how can the flow of energy be observed? Tobias Brixner's group at the Institute of Physical and Theoretical Chemistry at Julius-Maximilians-Universität (JMU) Würzburg in Bavaria, Germany, are considering this problem.
In the journal Nature Communications, the team now presents two new spectroscopic methods with which energy transport on the nanoscale can be observed. According to the JMU professor, the new findings provide valuable information for the design of artificial light-harvesting antennas.
These research successes were achieved in cooperation with the working groups of Christoph Lambert and Todd Marder (JMU Würzburg), Uwe Bunz and Andreas Dreuw (University of Heidelberg) as well as Jasper Knoester and Maxim Pshenichnikov (University of Groningen, Netherlands).
Nanotubes imitate nature
Using the new methods, the research teams have succeeded in deciphering the energy transport in double-walled nanotubes made up of thousands of dye molecules. These tiny tubes serve as models for the light-harvesting antennas of photosynthetically active bacteria.
At low light intensities, the energetic excitations are transported from the outer to the inner wall of the tubes. At high intensities, on the other hand, the excitations only move along the outer wall—if two excitations meet there, one of them disappears. "This effect, which has been known for some time, can be made directly visible with our method for the first time," says Brixner.
The measurements were carried out by combining a technique called exciton-exciton-interaction-two-dimensional spectroscopy (EEI2D spectroscopy), which was developed in the Brixner group with a microfluidic arrangement of the Groningen group.
In the second paper, the research teams also demonstrate a new approach to measuring energy flows. The highlight: The speed of the data recording was much faster than that of state-of-the-art methods. Within just eight minutes, it was possible to measure up to 15 3-D spectra simultaneously in a single experiment. Traditional methods, on the other hand, typically require several hours for only a single spectrum.
As a basis for measuring coherent spectra over three frequency dimensions, the researchers employed a fast method of varying the temporal sequence of ultrashort laser pulses. "The expansion from 2-D to 3-D frequency analysis and the increase in the number of light-matter interactions from the four usual in the literature to six now provides detailed insights into the dynamics of highly excited states," says Brixner.