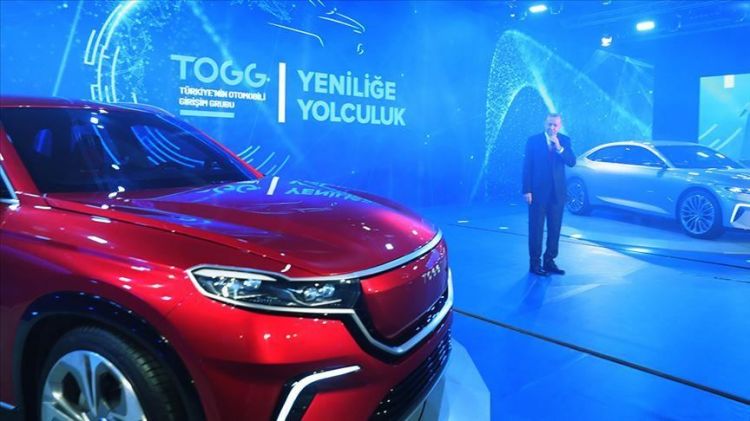 Speaking at the publicity ceremony of the car in the industrial province of Kocaeli, Recep Tayyip Erdogan said: “Today, we are witnessing a historic day of realizing Turkey's 60-year dream together."

Stating that over 100 Turkish engineers worked to realize the project, he said: "We don't buy a license or permission from anyone, we determine all the technical features by ourselves.”

Erdogan stressed Turkey will deter all efforts to hinder the production of its own car.

“They managed to hinder the production of Devrim but they will not be able to hinder this automobile," he added.

Turkey first attempted to produce its own car in 1961, the Devrim (Revolution), but it never made it past the prototype stage.

“Turkey is not only a market for new technologies but has become a country that develops, produces and exports them all over the world," Erdogan said.

Erdogan placed an advance order for the car and later sat behind the wheel of one of the cars. The two models unveiled on Friday are red and white in color, to signify the Turkish flag.

In a tweet, Erdogan later expressed hope that the country's “experience in automobile technology projects will be an initiator and also pave the way for many other sectors.”

“We will have reached our goal the day we see our cars on the roads all over the world, starting from closer markets such as Europe,” he added.

Turkey has mobilized 750 million Turkish liras (over $126 million) to fund innovation and regional development, according to the country’s industry and technology minister.

The electric car will have five models with 175,000 units produced in a year.

The Turkish president also gave a test-drive for the SUV model of Turkey’s new full-electric car. He sat behind the wheel just after the publicity ceremony of the automobile in Kocaeli.