Galactic Pyrotechnics from 23 million light-years away 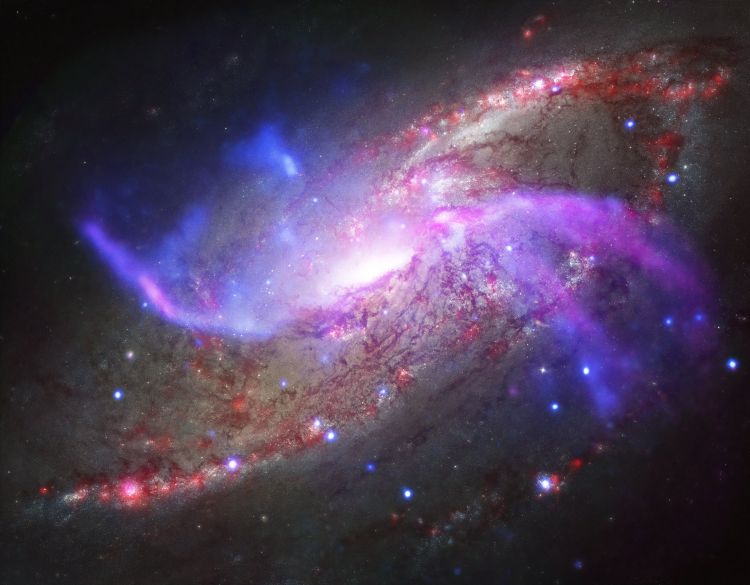 NASA has recently captured an intermediate spiral galaxy NGC 4258 about 23 million light-years away that is famous for something that our galaxy doesn’t have – two extra spiral arms that glow in X-ray, optical and radio light. These features or strange arms are not lined up with the plane of the galaxy, however, rather intersect with it, Eurasia Diary reports citing Tech Explorist.

The galaxy looks like a site of impressive, ongoing fireworks. Its light show involves a giant black hole, shock waves, and vast reservoirs of gas.

Another examination made with Spitzer shows that shock waves, like the sonic booms from supersonic planes, are heating a lot of gas – identical to around 10 million suns. What is creating these stun waves? Specialists think that the supermassive black hole at the center of NGC 4258 is creating powerful jets of high-energy particles. These jets strike the disk of the galaxy and generate stun waves. These shock waves, thus, heat the gas – made for the most part out of hydrogen molecules – to thousands of degrees.

The image reveals huge bubbles of hot gas that indicate that the gas in the disk of the galaxy has been heated and ejected into the outer regions by the jets from the black hole. According to scientists, this gas could be ejected within the next 300 million years as much of the gas in the disk has already been ejected.

The data was additionally used to determine the rate at which stars are forming in the central regions of NGC 4258. Scientists found that the rate which is about ten times less than in the Milky Way galaxy.