KOI-5Ab is approximately 1,800 light-years from Earth 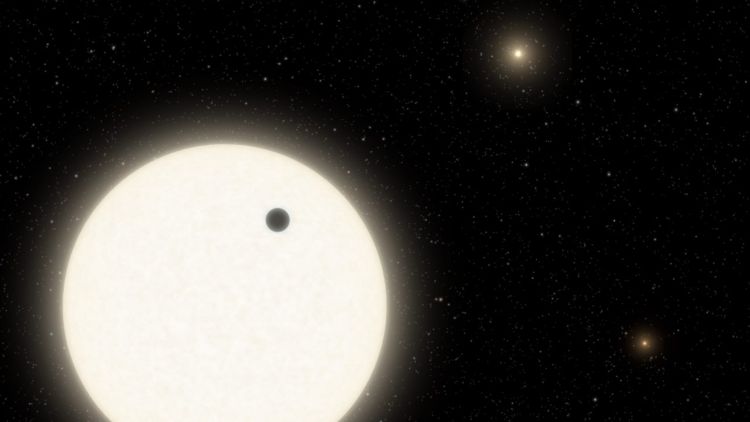 This illustration shows the planet KOI-5Ab transiting across the face of a Sun-like star, which is part of a triple-star system located 1,800 light-years away in the Cygnus constellation. (Credits: Caltech/R. Hurt Infrared Processing and Analysis Center, or IPAC.)
NASA has discovered an exoplanet with three stars, one with a bizarre orbit that has left astronomers baffled.
The planet, known as KOI-5Ab was discovered in 2009 by NASA's Kepler space telescope, but it was "abandoned" by scientists because the space telescope had easier candidates to identify.
"KOI-5Ab got abandoned because it was complicated, and we had thousands of candidates," said David Ciardi, chief scientist of NASA's Exoplanet Science Institute, in a statement. "There were easier pickings than KOI-5Ab, and we were learning something new from Kepler every day, so that KOI-5 was mostly forgotten."
KOI-5Ab is approximately 1,800 light-years from Earth. A light-year, which measures distance in space, is approximately 6 trillion miles.
However, thanks to NASA's Transiting Exoplanet Survey Satellite (TESS) and other Earth-based telescopes, KOA-5Ab has been given new life, with researchers discovering its perplexing orbit.
Due to its size, KOA-5Ab is likely a gas giant, similar to Jupiter or Saturn, but it circles a star in its star system, KOA-5A, once every five days. It's also out of alignment from at least one of the other two stars and possibly both.
"We don’t know of many planets that exist in triple-star systems, and this one is extra special because its orbit is skewed," Ciardi added. "We still have a lot of questions about how and when planets can form in multiple-star systems and how their properties compare to planets in single-star systems. By studying this system in greater detail, perhaps we can gain insight into how the universe makes planets."
In contrast, KOI-5A orbit KOI-5B each other, once every 30 years. KOI-5C orbits the two once every 400 years, leaving the four celestial objects in a skewed orbit as a result of different planes.
It's unclear what caused the skewed orbit, though they "believe that the second star gravitationally kicked the planet during its development, skewing its orbit and causing it to migrate inward," the NASA statement added. It's believed that triple-star systems are roughly 10% of all star systems.
The findings were recently presented at a virtual meeting of the American Astronomical Society.
Researchers have discovered other planets with three stars in recent memory. In July 2019, exoplanet LTT 1445Ab was found to orbit one of the three suns, all of which are described as mid-to-late-life red dwarfs.
In September 2020, researchers discovered that the GW Orionis star system, which is located at the edge of the Orion constellation, has two stars that orbit one another with the third orbiting the two siblings at a distance of approximately 740 million miles. Inside the rings could be dust, or the beginnings of a young exoplanet, which could explain the misalignment of the system's gravitational pull.
More than 4,000 exoplanets have been discovered by NASA in total, approximately 50 of which were believed to potentially be habitable as of September 2018. They have the right size and the right orbit of their star to support surface water and, at least theoretically, to support life.