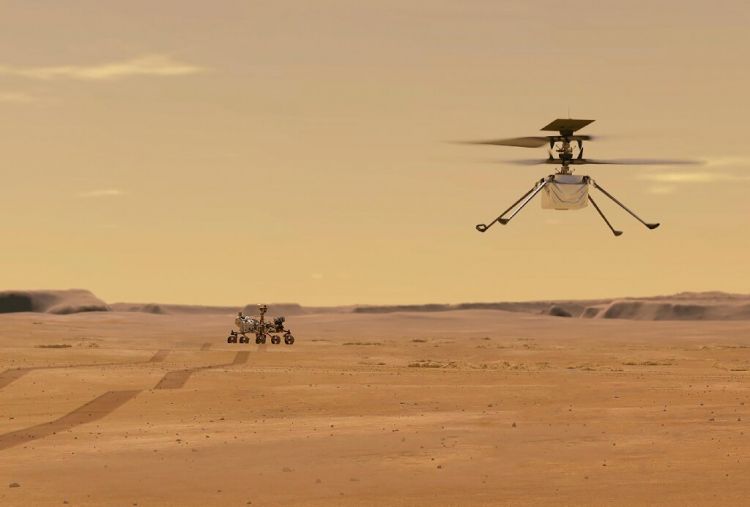 The American space agency has successfully flown a small helicopter on Mars.
The drone, called Ingenuity, was airborne for less than a minute, but Nasa is celebrating what represents the first powered, controlled flight by an aircraft on another world.
Confirmation came via a satellite at Mars which relayed the chopper's data back to Earth.
The space agency is promising more adventurous flights in the days ahead.
Ingenuity will be commanded to fly higher and further as engineers seek to test the limits of the technology.
"We can now say that human beings have flown a rotorcraft on another planet," said a delighted MiMi Aung, project manager for Ingenuity at Nasa's Jet Propulsion Laboratory in Pasadena.
"We've been talking for so long about our Wright Brothers moment on Mars, and here it is."
This is a reference to Wilbur and Orville Wright who conducted the first powered, controlled aircraft flight here on Earth in 1903. 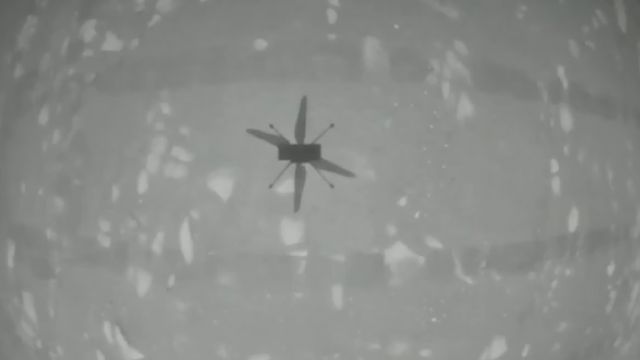 Ingenuity even carries a small swatch of fabric from one of the wings of Flyer 1, the aircraft that made that historic flight at Kitty Hawk, North Carolina, more than 117 years ago.
The demonstration saw the Mars-copter - called Ingenuity - rise to about 3m, hover, swivel and then land.
Getting airborne on the Red Planet is not easy. The atmosphere is very thin, just 1% of the density here at Earth. This gives the blades on a rotor craft very little to bite into to gain lift.
There's help from the lower gravity at Mars, but still - it takes a lot of work to get up off the ground.
Ingenuity was therefore made extremely light and given the power to turn those blades extremely fast - at over 2,500 revolutions per minute for this particular flight.
Flight control must be autonomous. The distance to Mars - currently just under 300 million km - means radio signals take minutes to traverse the intervening space. Flying by joystick is simply out of the question.
Ingenuity was carried to Mars in the belly of Nasa's Perseverance Rover, which touched down on the Red Planet in February.
Perseverance then drove to an "airstrip" about 20m away from its landing site in Mars' Jezero Crater, lowering Ingenuity to the ground and taking a selfie of the two of them.
A successful maiden outing means that a further four flights will be attempted over the coming days, each one taking the helicopter further afield. 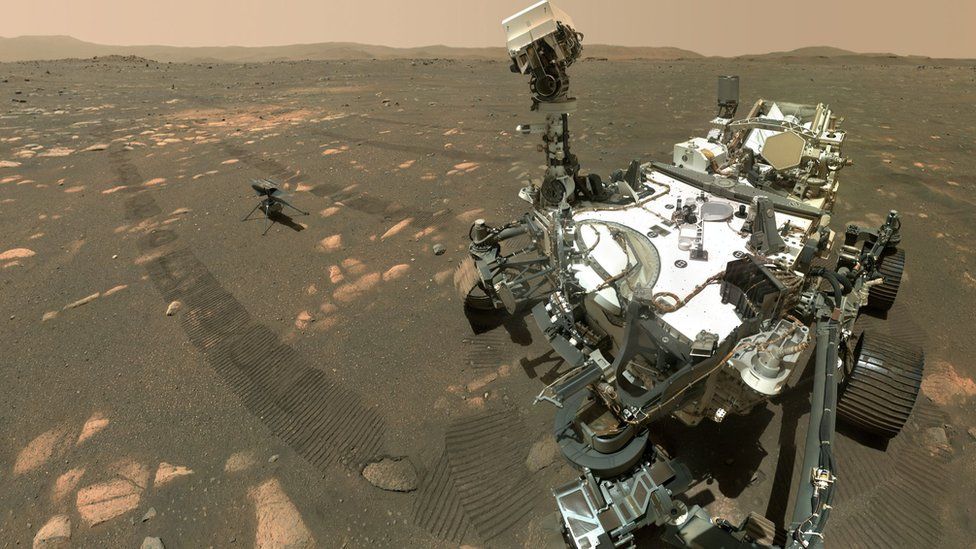 The hope is this initial demonstration could eventually transform how we explore some distant worlds.
Drones might be used to scout ahead for future rovers, and even astronauts once they eventually get to Mars.
Nasa has already approved a helicopter mission to Titan, the big moon of Saturn. Dragonfly, as the mission is known, should arrive at Titan in the mid-2030s.