China landed on the moon and found water in dirt and rocks
Read: 244

Russian Helicopters is considering a possible unmanned version of the Ka-226 helicopter, an executive of the Moscow-based aerospace company revealed to TASS.
The Ka-226 is a twin-turbine utility rotorcraft initially developed in the late 90s for disaster relief. Later, several variants of the helicopter were developed for search and rescue, medivac, disaster relief, policing, fire fighting, and patrol.
Oleg Landin, Marketing and Business Development Director of Russian Helicopters, said: “We will probably develop an unmanned aerial vehicle of one thousand kilograms (2,205 pounds) on the basis of a coaxial scheme [analogous to] the Ka-226, the modular design of which allows us to do this quickly enough, in our opinion.”
Other Unmanned Rotorcraft
The news came a week after Landin told TASS that Russian Helicopters was planning to develop a drone capable of carrying around 200 kilograms (440 pounds), then upgrade its capacity to a ton.
The director was speaking on the occasion of unveiling a BAS-200 small rotary-wing drone at the MAKS-2021 air show. The BAS-200, with a takeoff weight of 200 kilograms (441 pounds), can carry 50 kilograms (110 pounds).
The helicopter drone has a maximum speed of 160 kilometers (99 miles) per hour and can fly at a maximum altitude of 3,900 meters for four hours.
The VRT-300
In addition to the BAS-200, Russian Helicopters also has the VRT-300, another unmanned helicopter drone. Developed by VR-Technologies, a subsidiary of Russian Helicopters, the aircraft was unveiled at the MAKS-2017 air show.
The unmanned rotorcraft was developed for arctic ice patrols in support of safe maritime navigation and is capable of carrying a payload of up to 70 kilograms (154 pounds).
The VRT-300 can fly up to 600 kilometers (372 miles) at a maximum speed of 180 kilometers (111 miles) per hour. 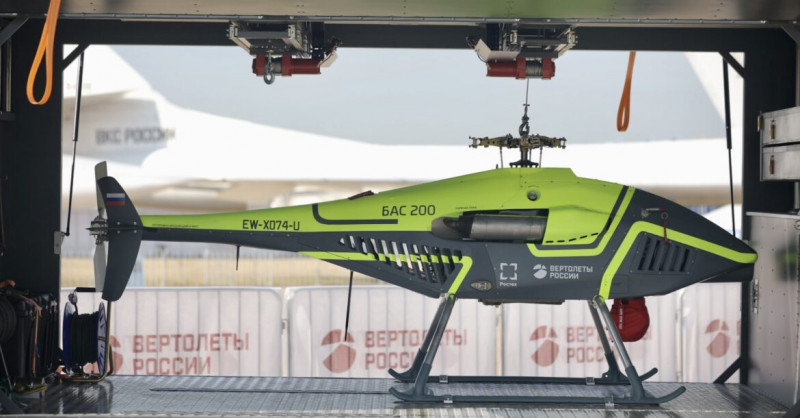