Russia will now change its position on the glorification of Nzhdeh in Armenia - "Top secret" stamp is removed from archive documents | Eurasia Diary - ednews.net 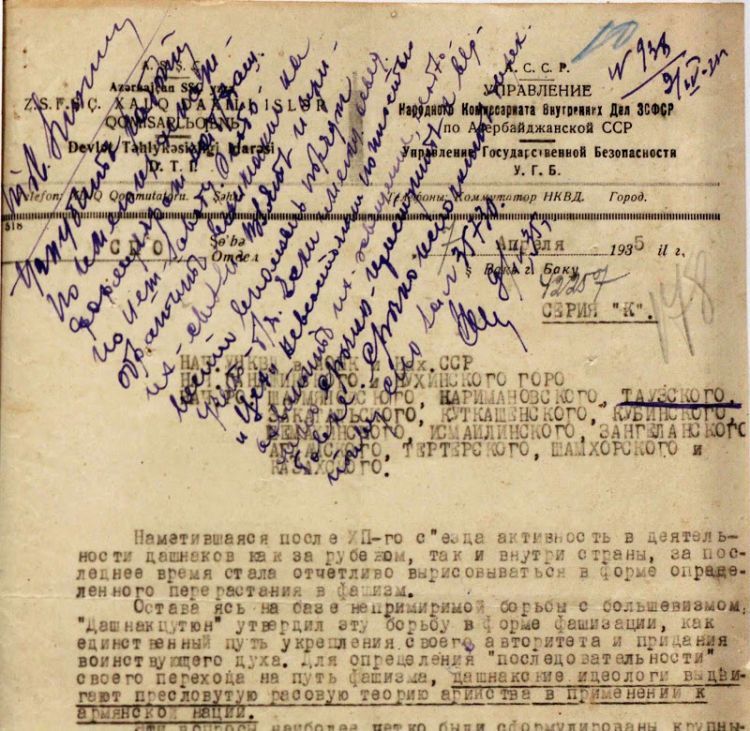 On September 20, the first in the series "Armenia: the country of allowed Nazism" press conference held by the Russian professor, historian, jurist and candidate of historical sciences Oleg Kuznetsov was held in the Baku International Press Center. Oleg Kuznetsov’s conference was devoted to the results of scientific research of the archives of the State Security Service of the Republic of Azerbaijan and the presentation of archival documents revealed by him and declassified by the Soviet state security bodies (Joint State Political Directorate “OGPU” - The People's Commissariat for Internal Affairs “NKVD” - Ministry of State Security “MGB” -KGB of the USSR) containing the evidences of the Nazi content ideology “Tseghakron” (Tseghakronism- arm. Ցեղակրոնություն). This ideology is today’s state ideology in the Republic of Armenia.

The moderator of the event was the director of the Center for the History of the Caucasus, senior researcher of the Institute of Law and Human Rights of Azerbaijan National Academy of Sciences (ANAS), historian Rizvan Huseynov.  Dean of the faculty of history of BSU, Professor Azad Rzayev, editor-in-chief of the Region Plus journal Namik Mayilov, deputy chairman of the press council, president of the International Eurasia Press Fund, Umud Mirzayev, representatives of various institutes of the Academy of Sciences, state institutions, public figures and media attended this conference.

During the event, it was noted that the Armenian authorities at the state level propagandize the teachings and cult of the fascist Garegin Nzhdeh, who is the ideologist of Armenian fascism and the Armenian Nazi doctrine. This Nazi criminal was arrested in 1944 by Soviet special services and convicted as an accomplice of fascist Germany.

In the early 1930's. Garegin Nzhdeh (or Njdey, which in Armenian means idle, a tramp) put forward a racist idea about the superiority of the Armenian people over others, spread this Nazi idea, gathered his supporters and adherents and then served fascist Germany. During his press conference, Oleg Kuznetsov spoke about the painstaking work he had done in the archives of the State Security Service of Azerbaijan and held a presentation of archival materials exposing the fascist face of Armenian nationalism of Garegin Nzhdeh, who is now being presented in Armenia as a "national hero".

Speaking about the figure of Garegin Nzhdeh himself, as an ideologist of Armenian radical nationalism - tseghakronism, the historian emphasized that his figure had already acquired a variety of myths, including that he was allegedly brought to criminal responsibility and was imprisoned in 1912 for his ties with Dashnaktsutyun ", although, in the raised archival documents among 158 persons brought to responsibility, his name is not indicated, which indicates falsification.

He recalled that Garegin Nzhdeh fought against the USSR in the framework of cooperation with fascist Germany for a long time, and was also a culprit for killing the civilian population of the Muslim faith in the Balkans, the Caucasus, Azerbaijan, and northern Iran.

As a result of this event, it was emphasized, that it is planned to conduct another 2 press conferences from the series” Armenia: the country of allowed Nazism”. The results of these investigations will be presented during the planned conferences. It should be noted that the "Top secret" stamp has already been removed from the documents and they are partially shown on the website of the State Security Service of Azerbaijan under the link   http://dtx.gov.az/news257.php