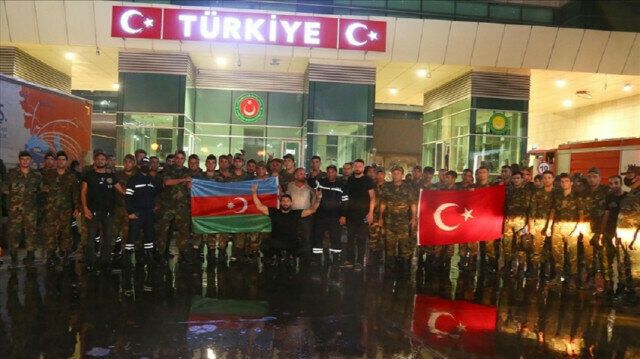 Azerbaijan dispatched another firefighting team early Monday to support Turkey as it battles forest fires ravaging the country since Wednesday.
The support team arrived at Turkey's border with Georgia and entered the country through the northeastern province of Artvin.
Consisting of 53 vehicles including 41 fire trucks and 220 personnel, the team was received by excited Turkish citizens who showed their appreciation for the Azerbaijani and Turkish flags.
After a fuel delivery, the team moved on towards the areas suffering from massive fires.
"We have come here with experienced colleagues to extinguish the fires," said the chief of the team, Colonel Nazar Bagisov.
"We stand with brotherly Turkey, and we will do so under all circumstances," he added.
Blazes broke out in at least 35 provinces, including several on Turkey’s Mediterranean coast, killing at least eight people.
As many as 271 other people have been affected, according to the Disaster and Emergency Management Authority (AFAD).
Turkish authorities are maintaining tireless efforts to put out the fires through both aerial and ground operations. Firefighters, including a group of 100 Azerbaijani firemen, have also been working along with locals to fight the blazes.