What is expected in Syria? - International experts - EXCLUSIVE 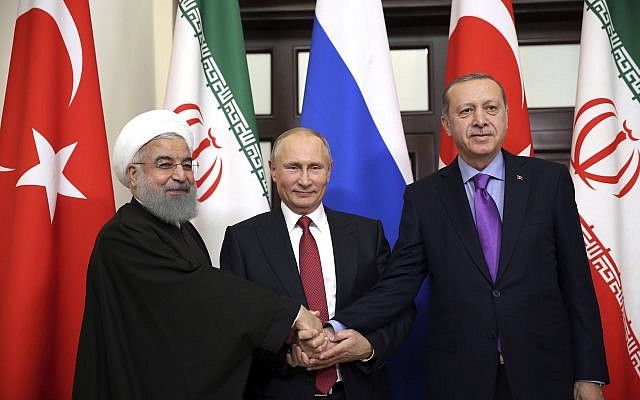 On 8th of September, 2018 Tehran summit on the Syrian issue was held in the capital of Iran, Tehran. Iran's President Hassan Rouhani  hosted his Russian and Turkish counterparts - Vladimir Putin and Recep Tayyip Erdogan - amid growing international warnings over a looming humanitarian catastrophe in Idlib, a province hosting more than three million people, half of whom are internally displaced.
To remind, Iran and Russia are major allies of Syrian President Bashar al-Assad, while Turkey backs certain rebel groups, including some in Idlib, who are seeking his removal.
Eurasia Diary tried to clarify the real expectations within this summit held in Tehran, thus 2 famous political experts in the face of Peter Tase and Paul Goble shared with Eurasia Diary their vision about the current situation in Idlib and Tehran Summit.
Peter Tase, American journalist, expert on political and international relations at the University of Chicago, shared his thoughts linked to the purposes of a summit held in Tehran and touched upon Nagorno -Karabakh dispute between Azerbaijan- Armenia. Peter Tase - Political analyst
He stressed: “The trilateral Summit between Turkey, Russia and Iran; will address many pressing issues on Syria and the Middle East. Currently there are five main geopolitical currents that are guiding the fragile situation in Syria and the Middle East: United States, European Union, Iran, Russia and Turkey.  This summit aims to pave the path of a peaceful solution to the Syrian Civil War; unfortunately the absence of Washington in this round table will reduce the chances of securing peace in the Middle East. This Summit on Syria sounds to be more like a gathering of two large countries that are facing major economic challenges, measures, legitimately imposed by the White House; and of course Turkey is participating due to its strategic position and as a neighbouring country of Syria and Russia.  Expectations of this summit are high, but little engagement of Western Powers will sharply reduce its outcomes. These three countries must urgently address the permanent solution of Azerbaijan's full territorial sovereignty and make sure that Nagorno Karabakh and its seven districts are fully liberated from the occupation of Armenian Armed Forces and from Special Forces of other nationalities. It is crucial to secure Azerbaijan's Full Territorial sovereignty in order to preserve peace and security in the world”.
American expert also assessed the latest situation in Syria and shared his opinion about Turkey’s position on this issue
“The security plight in Syria continues to be dangerous. Geostrategic differences and economic, military interests of Russia and Iran are further complicating the territorial integrity of Syria. What comes to Turkey, I consider, historically there have always been geostrategic disagreements between Turkey and Russia, this trend will continue and Ankara will pursue a significant rapprochement with NATO once again”- he added
Let us remind, Turkey, Russia and Iran act as closest allies, but on the other side each of these countries has their own interests in Syria. Russia and Iran, unlike Turkey are backing Bashar Assad’s regime. Thus it creates some frictions and discrepancies in ties between Ankara and Moscow. Especially, the furry of critics in Russian media outlets sparked when Turkish Foreign Minister Cavushoglu denounced Russian side for its assault on Idlib. Well known American journalist and political expert Peter Tase also tried to enlighten this moment in his interview with Eurasia Diary.
“The Republic of Turkey is living its best moments in the following sectors: economic growth, dynamic cultural diplomacy, admirable foreign policy and a robust well trained Armed Forces. Turkey is a close ally of United States and Ankara's frictions with Moscow will continue in the future”-  Peter Tase underlined.
Eurasia Diary also conducted an interview with another American expert Paul A. Goble, who served as special adviser on Soviet nationality issues and Baltic affairs to Secretary of State James Baker.
Paul A. Goble, an American analyst, writer and columnist with expertise on Russia shared his thoughts on Tehran Summit and tried to elucidate what are the real intentions of Ankara and which political goals it pursues.

Paul A. Goble - political analyst and writer
In his interview with Eurasia Diary, he said: “Turkey is trying to enhance its power and freedom of action by navigating back and forth among the positions of the great powers. I don’t think it has a broader agenda than that just now.  Cooperation with Russia gives it leverage with the West; cooperation with the West gives it leverage in Russia.  Ankara does care about what happens in Syria because of its own equities, including the Kurds, on the ground and does not want to see them victorious. But it lacks the ability to block all others at one and the same time and so will continue to move back and forth. I don’t expect consistency anytime soon".
Interviewed by Akber Bayramov
Correspondent of Eurasia Diary