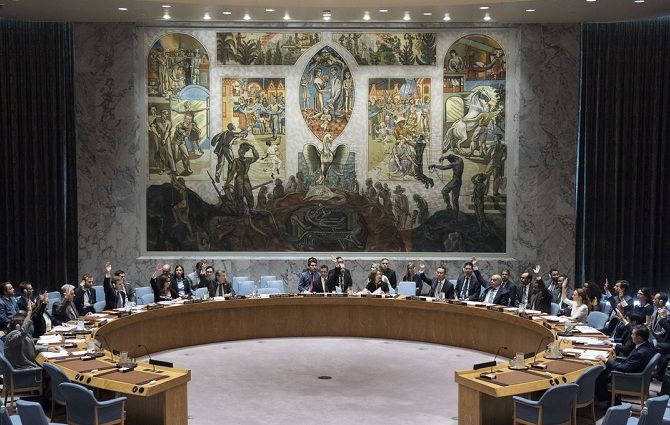 30 April 2019, Security Council by a vote of 13 in favour to none against with 2 abstentions (Russian Federation, South Africa), adopted a Resolution 2468, authorizing six-month extension of United Nations peace keeping MINURSO until 31 October.

The resolution expresses concern about violations of the ceasefire agreement in reference to the Polisario Front activities at the Guergarate region (border between Morocco and Mauritania) and calls upon the conflicting parties to fulfill their obligations regarding the personal envoy of the UN Secretary General and refrain from any actions that endanger the negotiations with the assistance of the UN.

It is also welcoming “serious and credible Moroccan efforts to move the process forward towards resolution”.

Security Council expressed its appreciation of the two previous round-table meetings, held on 5−6 December 2018 and on 21–22 March 2019. It also “calls upon Morocco, the Frente Polisario, Algeria and Mauritania to cooperate more fully with each other”.

As it was stated in the Resolution 2468, the Security Council is “reaffirming its commitment to assist the parties to achieve a just, lasting, and mutually acceptable political solution, based on compromise, which will provide for the self-determination of the population of the Sahara in the context of arrangements consistent with the principles and purposes of the Charter of the United Nations, and noting the role and responsibilities of the parties in this respect.”

According to the opinion of Political Analyst Anastasia Lavrina, that is a key message for the parties. "While calling for necessity of an immediate referendum, which means the right of a people to determine its own destiny, the Polisario Front forgets that autonomy is also a form of self-determination in the event of political agreement between the parties. Neither the form nor the outcome of self-determination are stated in UN Charter. Therefore, self-determination of the population from the Sahara region is still a valuable point, but it has to be defined as the right of people to choose their political status, their economic choices etc. not just independence.

Throughout the negotiation process the government of Morocco has always expressed its readiness to cooperate with other parties to contribute to security and stability formation in the region. Taking into account a number of failure UN resolutions and plans to resolve the conflict, Morocco considers the status of full autonomy for the Sahara to be an important step in resolving the longstanding problem. The Moroccan Autonomy Plan, proposed in 2007, received much attention and support as the most promising political solution to resolve the conflict within the framework of territorial integrity of the country, which is a guaranty of national unity and stability in the region. According to this plan, the Sahara will be given the right to run its affairs democratically, through legislative, executive, and judicial bodies and actively participate in the nation’s economic, social and cultural life. Moreover, it will be provided with the financial capabilities needed for the development of the region, its restoration and further integration.

Autonomy will provide significant privileges to the people in the Sahara region. It will positively affect the formation of security in the full region of North Africa and decrease number of IDPs and refugees. Finally, it will make all people living in the region to interact and integrate together that will positively affect the formation of stability", Lavrina said.

The Sahara conflict between the Frente Polisario and the Kingdom of Morocco is one of the modern world's oldest. A former Spanish colony became the subject of a long-running territorial dispute that poses a potential danger for stability and security in the entire region of North Africa. The conflict was escalated during 1970s and the year of 1973 ultimately played a significant role for a ceasefire that was after a long effort signed between Kingdom of Morocco and Frente Polisario in 1991. Since 1991, after reaching a cease-fire agreement, the UN peacekeeping mission on the referendum, established under the mandate of the UN Security Council, has been operating in the Sahara.