The attack of Armenian military was this time a military answer to the peaceful speech of the Azerbaijan President Ilham Aliyev in the UN - Turkish Professor
Read: 478 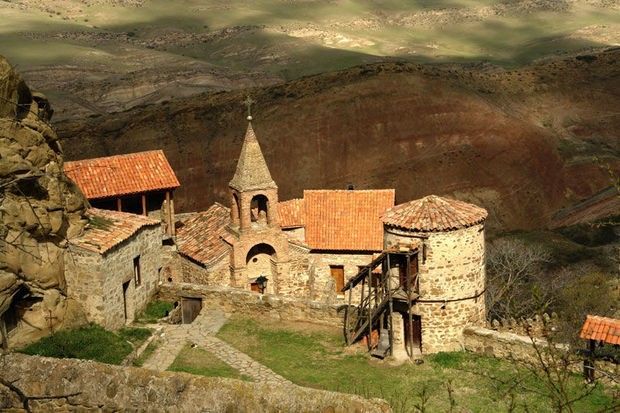 As we reported, two days ago, a Georgian citizen attacked Azerbaijani board guards during a protest by a group of Georgian citizens in the "Keshikchidag" monastery and took their weapons and bullets from their hands. A video of the incident has been posted on social networks.

To note, though, that Georgian border guards were at the scene, they were just watching and did not interfere into the events

This incident has re-activated the "Keshikchidag" problem, which has been causing debate for months. 64% of the border area between Azerbaijan and Georgia was delimited. The remaining 36% is considered a controversial territory; and this monastery is located in the remaining area. On April 23, after the Georgian President Salome Zurabishvili's call for immediate delimitation of the territory, Azerbaijani border guards strengthened control of the area. Consequently, problems for Georgian citizens entering the territory thus arose.

Azerbaijan and Georgia have jointly created expert groups and Delimitation Commissions to solve the territorial dispute. However, the recent case of seizing the ammunition of the Azerbaijani soldier by Georgian activists has seriously troubled Azerbaijani public.

According to Mr. Suleymanov, these developments are provocation created by power groups aiming to aggravate relations between Azerbaijan and Georgia:

"Since Keshikchidag issue has been actualized, I have been reiterating the same words in my statements to media outlets of both countries. The third force in this matter fuels the debate. There are forces trying to create a problem between Georgia and Azerbaijan, feel uneasy about the alliance of these two states. These forces exacerbate the issue using successfully various provocateurs and political groups seeking approval, but the parties should not lose their tempers and remain careful in this matter. Of course, disrespect to the Azerbaijani soldier also made to Azerbaijan and its people. This makes us, the people who try to protect the alliance of the two states very concerned. But as a parliament member, I want to tell my compatriots that not all Georgian citizens share the same opinion with the provocateurs in the  "Keshikchidag" area and never support their stance."

Georgian MP thinks that the Azerbaijani soldier’s behavior during the incident on the border is commendable. "After watching the video of the incident, I really owe myself a thank to the Azerbaijani soldier. The soldier did not come into conflict with the provocateurs and stayed calm. In that situation, the Azerbaijani soldier could use many ways or even fire. However, he was trying to patiently calm down people gathered there. I think that all Georgian citizens owe these soldiers a debt of gratitude. Because they did not respond to provocation and prevented the further escalation of relations between the two states," said Azer Suleymanov, and he related the non-interference of Georgian armed forces into the incident to policy Georgian government:

"No power structure interfered with these conflicts. The reason is the government did not issue concrete orders. This is just one example out of many issues on the border. The Ivanishvili government intentionally dilates this incident and fuels it. You know, how much influence their authority has lost in the last month. Even the parliament speaker was forced to resign after protests. There is serious dissatisfaction with the Ivanishvili government in the country. In such a situation, the government seeks to dissuade public opinion using cheap political games and such provocations, and therefore to increase their influence."

Mr. Suleymanov also emphasized that Azerbaijan has supported Georgia throughout history: "The Georgian people have forgotten Azerbaijan's support in the 2003 and 2008 crisis. During the war with Russia, Georgia survived owing to assistance from Azerbaijan. These favors should not be forgotten; and partnership between the two states has to continue."