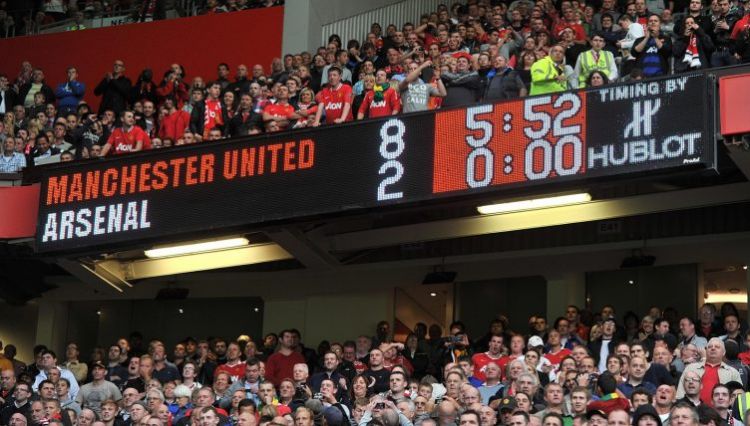 Eleven years have passed since Manchester United put eight goals past Arsenal at Old Trafford at the start of the 2011–12 Premier League season.
On that fateful Sunday, a depleted Arsenal — without Thomas Vermaelen, Gervinho, Alex Song, Kieran Gibbs, Bacary Sagna, Jack Wilshere or Abou Diaby — were humbled by a not-even-that-strong-on-paper United side containing Phil Jones, Anderson and Tom Cleverley.
It was a game that foreshadowed either a lot or a little, depending on how you see it.
In an obvious way, the match presaged the general misery of the late-Wenger years, occurring almost exactly midway between their winning the league as Invincibles and their sad, belated bye-bye to their manager.
The humiliation was also the catalyst for a number of transfers, some of which would prove significant for both teams.
Arsenal left-back Armand Traore was sold just two days later, and within the week the club had signed Per Mertesacker, Mikel Arteta and Andre Santos, two of whom continue to play an important role at the club. (The other owns a terrible restaurant.)
Furthermore, it’s hard to imagine that the humbling scoreline didn’t play a part in Robin van Persie’s decision the following summer to join United.
At the same time, however, the scoreline was contraindicative of future events: it was a game of false dawns as much as dark omens.
Wojciech Szczesny, Aaron Ramsey and even Francis Coquelin matured into good players; Jones, Anderson and Cleverley arguably did not.
Meanwhile Wayne Rooney, Ashley Young and Nani would never again be as prolific as they were during this season.
In fact, Arsenal’s scorers in this game would score more league goals for United the following season (2012–13) than United’s own: Van Persie would get 26 while Rooney, Young, Nani and Welbeck would muster just 14 between them.
Even the bragging didn’t last. United lost 6-1 to Manchester City less than two months later and ultimately ceded the title to their city rivals, somehow managing to take the fun out of the 8-2 as well as any potential significance.
Regardless of its implications, though, the match contained some really, really good goals. Here they are, ranked by beauty.