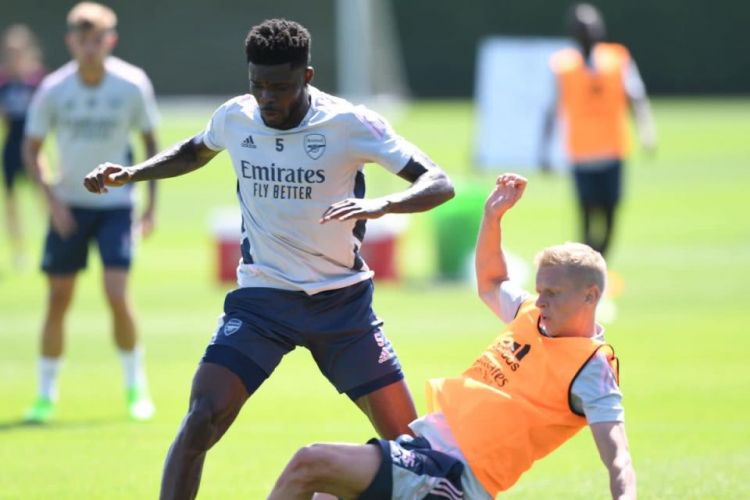 It probably speaks to the importance of this game that neither Antonio Conte nor Mikel Arteta was willing to give anything away when it came to their players' availability ahead of Saturday's North London Derby.
The Italian got the pre-match Cold War underway by refusing to engage in any detail with regards to team news for fear of "giving an advantage to Arsenal." Never one to be usurped when it comes to press conference vaguery Arteta responded with an equally non-committal "the boys look in good condition," during his own media duties ahead of the game.
How much of an advantage this bizarre dance actually gives the respective teams ahead of this game is impossible to know, but what it does do is make the starting line ups excruciatingly tricky to predict.
One area of the Arsenal XI that we can pretty confidently guess is the goalkeeping position where Aaron Ramsdale will undoubtedly start. The England international will be keen to take revenge after what he admits was a disappointing end to the season compounded by a humiliating defeat at the Tottenham Hotspur Stadium in May.
Unavailable that night was Ben White, who has since switched position out to right back. Had he been on the pitch who's to say if the Gunners might have been able to come away with a better result, but despite Takehiro Tomiyasu's defensive capabilities against Spurs' counter attacking threat, the 24-year-old will be keen to resume his fine form after getting his revenge tour off to a good start with a stellar performance against Brentford in reaction to his omission from the England squad.
White's possessional play will be essential to the type of football Arteta wants to play on the day, and you would imagine that it will be a similar situation over on the left side of defence. Kieran Tierney did actually play well against Brentford, but you wonder if the Oleksandr Zinchenko's technical superiority could be preferred in the event that he is recovered from a calf problem that saw him miss the international break.
Inside of them Gabriel will be desperate to keep his first clean sheet in a North London Derby alongside William Saliba. The Frenchman faces a daunting task in his derby debut, but received the vote of confidence from his manager ahead of the match. "Willy has shown what he’s capable of in the past few months," Arteta said. "That doesn’t mean that the line up is always going to be in the same direction, but he’s been so good from my side I have no doubts."
In front of the backline you have to think that if Thomas Partey is even slightly ready to play then Arteta will look to throw him in. Arsenal have of course had their fingers burnt in this very fixture with this very policy when Partey limped off to allow Harry Kane clean through on goal to score at the Tottenham Hotspur Stadium a couple of years ago, and at the start of a run of nine games in one month it would represent a massive risk. But with Mohamed Elneny injured and Albert Sambi Lokonga prone to lapses in concentration at the base of the midfield it might be one worth taking.
Two players who can definitely be counted on are Martin Odegaard and Granit Xhaka. The Norwegian was seen training on Friday ahead of the game and should be fit to play, while Xhaka will be looking to continue a run of form that has seen him win over the Arsenal fans.
Bukayo Saka is someone who needs no reminding of how important this match is, while Gabriel Martinelli will be desperate to get his first North London Derby goal. In between them in the front line will be Gabriel Jesus, who despite the risk of a suspension with one more yellow card, will go pedal to the metal in order to write himself into Arsenal legend with a goal against Tottenham.