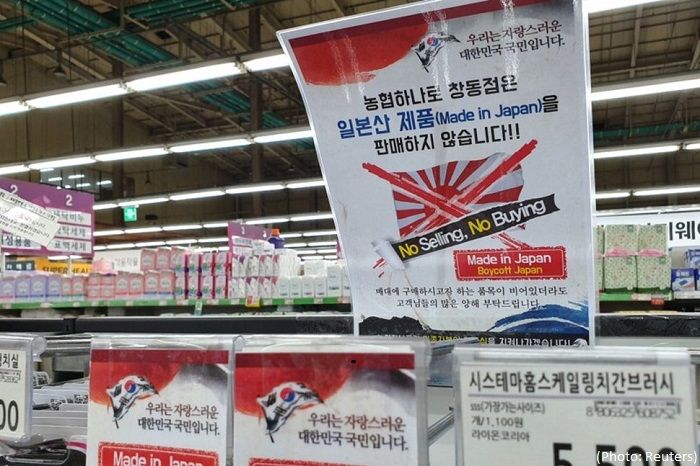 As soon as supermarket manager Cho Min-hyuk got to work the day after Tokyo imposed curbs on exports to South Korea, he pulled all Japanese products off the shelves.

It was Cho’s way of taking a stand against Japan in a quickly worsening political and economic dispute between the two east Asian neighbors.

Such anger has prompted a widespread boycott of Japanese products and services, from beer to clothes and travel, disrupting businesses in what was already the worst economic climate for South Korea in a decade.

Cho, who manages a 1,500 square meter Purunemart supermarket in Seoul, is taking the hit voluntarily. Over 200 other supermarkets and grocery stores are doing the same, according to Korea Mart Association, a trade group representing them.

“Japan putting pressure on South Korea through export curbs, showing no regret over its past wrongdoings, is completely unacceptable,” said Cho, adding the 10-15% drop in sales he is already facing won’t change his mind.

Diplomatic tensions intensified since a South Korean court last year ordered Japanese companies to compensate Koreans who were forced to work for Japanese occupiers during World War Two. On July 4, in apparent retaliation, Japan restricted exports of high-tech materials to South Korea, but denied the move was related to the compensation issue. Tokyo cited “inadequate management” of sensitive exports, with Japanese media reporting some items ended up in North Korea. Seoul has refuted that.

Seoul has resisted taking any countermeasures, saying it would raise the dispute with the World Trade Organisation. But Koreans are taking matters into their own hands, with beer apparently an easy target.

Hongcheon Culture Foundation, a beer festival organizer, told Reuters it canceled an order of 1.2 tonnes of Kirin beer even as at last year’s edition the Japanese brand accounted for a tenth of revenues.

South Korea buys 61% of Japan’s beer exports, spending 7.9 billion yen ($73.13 million) in 2018. Asahi Super Dry is the most popular imported brand, with sales tripling in the past five years, according to Euromonitor.

An Asahi spokesman said the company was monitoring developments but declined to comment on the impact.

Japan’s Fast Retailing (9983.T) fashion brand Uniqlo, which sells clothes worth around 140 billion yen - 6.6% of its revenue - in 186 Korean stores, is also feeling the anger.

Economists say the tech export curbs could shave 0.4 percentage point off South Korea’s gross domestic product this year. The boycott - if it proves to be more than just a brief burst of nationalistic fervor - could marginally add to that, unless consumers spend on something else.

“We are pleased to see this has turned consumers’ favor towards our pens,” said Park Seol, assistant manager at stationery maker Monami (005360.KS), whose online sales have risen five-fold since the curbs.

For now, emotions are running high. Marvel fan Jang Bum-jin, 34, said he threw away all his Japanese pens and is not going to watch the latest Spiderman movie, which is distributed by Sony Pictures - a U.S.-based company owned by Japan’s Sony Corp (6758.T).

“I love Spiderman, but I am fighting my desire to watch it,” he said.