Nearly 150 million people from the Midwest to the Atlantic coast are sweating through scorching temperatures, with New York declaring a heat emergency. At least three people have died, and many events have been canceled. 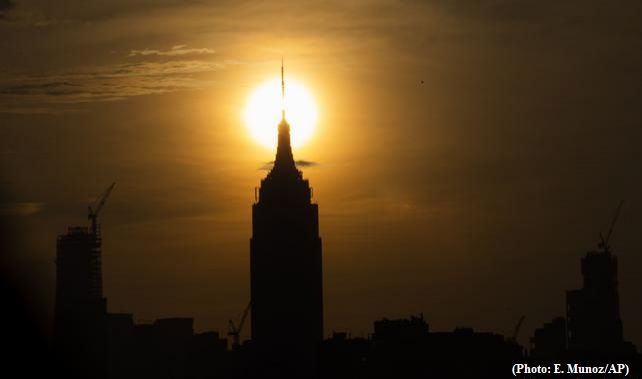 People across much of the East and Central United States are facing dangerously hot weather, with major cities including New York, Philadelphia and Washington experiencing temperatures nearing 38 degrees Celsius (100 Fahrenheit).

The combination of "dangerously high temperatures" and humidity could "quickly cause heat stress or heatstroke if precautions are not taken," the National Weather Service (NWS) said.

While the Midwest was due for a "slight reprieve" on Sunday, excessive heat will continue on the East Coast, officials said in a statement on Saturday.

The heat wave has reportedly killed at least three people, including Mitch Petrus, a former offensive lineman for the New York Giants. The 32-year-old died of heatstroke after working outside his family shop in Arkansas on Thursday.

Many events have been canceled due to the heat

Authorities in Boston, also on the East Coast, have made swimming in public schools free in an effort to combat the heat.

Several public events were also canceled in Washington and Chicago, including a 5K race. In July 1995, over 700 people died in Chicago during a three-day heat wave. Many of the dead were poor, elderly and lived alone.

The NWS has advised people to check on sick people and the elderly, drink plenty of water "even if you don't feel thirsty" and spend time in air-conditioned areas. On its website, the NWS also warned that "dozens of children and untold numbers of pets left in parked vehicles die from hyperthermia," or overheating, each year.

On Thursday, the US National Oceanic and Atmospheric Administration reported that June 2019 had broken global heat records.