Russia will not let UNSC become toy in hands of US - Russian Diplomat
Read: 604

Pro-democracy and pro-government demonstrators have rallied in Hong Kong, highlighting the political divide in the semi-autonomous Chinese territory. 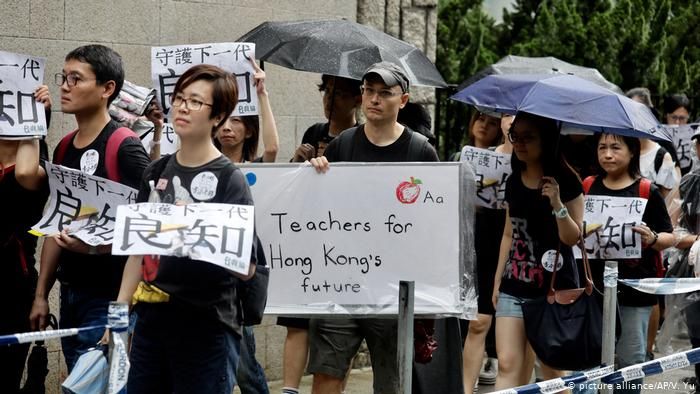 Thousands of teachers, led by their Hong Kong union, marched through torrential rain in support of pro-democracy protesters on Saturday.
The group then made their way to Government House where they tied white ribbons to a metal fence near the building. The group is demanding a probe into the use of police force in recent weeks and the resignation of Carrie Lam, the territory's embattled leader.
Since June, she has been under pressure to fully withdraw a bill that would allow extraditions to the Chinese mainland.
Upsetting 'harmony'
On the other side of the harbor, at the Kowloon pro-Beijing rally, speakers accused pro-democracy activists of upsetting harmony in the zone handed back conditionally by Britain to China in 1997.
"Before, everyone in Hong Kong helped each other," said Leo Chen, a 47-year-old driver, complaining about a loss of harmony.
Democracy activists, however, said further weekend rallies would show that their movement enjoyed broad support among the 7.4-million population — despite violent tactics used previously by a minority of hardcore protesters.
"The government right now doesn't listen to the people, and the police are too violent," said Bobby Tse, a retiree.
His remark coincided with Chinese state media seizing upon incidents, showing damning images and running articles.
Rival protests also flared Saturday in the Australian cities of Melbourne and Sydney, involving hundreds of pro-Beijing sympathizers and pro-Hong Kong democracy advocates, including Tibetans and Uighurs estranged by China's handling of minorities.
Speculation rife
Outside Hong Kong's border in Shenzhen, on China's mainland, China's paramilitary police force has been seen training, fueling speculation they could be sent in to suppress the protests.

Hong Kong police, however, insist their local forces are handling the situation.
Late on Saturday night (local time), a police unit thumped batons on shields as protesters faded away after throwing eggs and shining laser pointers outside a police station in the densely populated Mong Kok district.
Large rally due Sunday
For Sunday, Hong Kong's Civil Human Rights Front – the movement behind record-breaking rallies in June and July — billed a "rational, non-violent" protest in the island's Victoria Park.
"What we are fighting for is democracy and our rights," said Minnie Lee, a 31-year-old logistics worker. "We're not doing anything wrong. If we stop now, things will only get worse."
On Friday, the airline Cathay Pacific, which uses Hong Kong as an international hub, announced the shock resignation of its chief executive Rupert Hogg after some of its staff supported pro-democracy protests.
On Saturday, four accountancy firms, including Deloitte and PwC, distanced themselves from a newspaper advertisement purportedly placed by staff.
On their websites, the firms said the advertisement did not represent their stances and expressed opposition to violent or illegal behaviors.